Now, this is my kind of fishing!

It is with a touch of irony that we often say “the one constant in life is change”. Yet, despite the continuous fluctuations in our lives we really do struggle to accommodate it.

But coming to an understanding of what “change” actually means for us can indicate clear success or clear failure. It is part of our evolutionary makeup. Equally, for those of us charged with guiding businesses through the minefield of social media, there are additional responsibilities – it is not just about our own personal changes, it’s the changes faced by our colleagues, our management, executives and customers. And it is also about the organisational memory that needs to be recast or reimagined so that we can all make the transition.

Right now, there’s a lot of hurt being experienced and it’s because everything is changing. Not only are our roles changing, but so are our organisations. What we once loved may have to be sacrificed – be it a business process, a responsibility or even a customer. As with all things, there will be compensations – new customers, new approaches, promotions or new opportunities – after all, not all change is bad: but it is still change. And with every change comes a loss.

So how can we cope with this?

To become part of The Social Way – to need to move quickly through our sense of loss. We need to become Yes Men or Women. And one way to do this is to understand how we deal with loss, with grief and how to embrace acceptance.

This beautiful presentation from Leslie Bradshaw talks about the five stages of social media grief (something that Amber Naslund also wrote about recently). This can also be useful (see slide 6 specifically) to help map out the impediments that you are facing (is someone in denial, angry, bargaining or depressed) – before you reach that lovely state of “acceptance”.

By understanding the stage that you, your stakeholders and your organisation is placed, you can begin to address the challenges and overcome the hurdles that prolong the change process and cause the pain (for us all). And then, in parallel, you can begin to work together to create a newly imagined, social world.

Utopian? Maybe. But generosity and optimism are part of The Social Way. Our challenge is to accept the consequences of what that means.

The folks from Ignite Social Media have put together this infographic on the winners and losers in social media. I like the way they have thrown in some unusual facts – like the oldest, youngest and richest users of various social networks. They also suggest which social networks are on the rise, and that others are on the way out. What do you think? Are they on the money?

Here is a neat presentation from Dachis Group’s Dave Gray on organisational systems – contrasting the way we live with the way we work. On the one hand, we have our communities, neighbourhoods and streetscapes – and on the other we have our workgroups, our teams and business units. Why don’t we envision our workplaces in a similar way? Would this improve our sense of belonging, our productivity or our customer satisfaction scores? Take a flip through and let me know what you think.

This week I mix it up a little, with a bit of social media, some politics, some pop culture and a good dose of “do the right thing”. These five posts will get you started nicely this week.

I’ve never been a fan of film. While my friends studied film and communications, dreaming of becoming directors, journalists and documentary film-makers, my attention passed over the latest blockbuster, the must-see arthouse flick or the searing naval-gazing documentary as if it was already speaking in a dead language to me.

I studied theatre at university – completed a masters degree and even commenced a PhD on the subject of writing and performance. There was more breath – more life – in a dozen stanzas of Heiner Muller’s Hamletmachine or Shakespeare’s Macbeth than in almost any movie I had seen. Not that this always translated to live theatre – which seemed to want to replicate the shallow conventions of the silver screen. In my impatience for something more authentic, I’d often leave performances at interval, disillusioned between the promise and the delivery.

And so I’d return time and again to the text. That’s what fascinated me. But not just reading – I was drawn to writing as well. I wanted to understand what made great writing great. I wanted to follow the journey of writing to its end – or at least as close to its end as I could stand. And it was while starting this journey (that never ends) that I encountered one of my greatest teachers. And it all began with a single letter – H.

Helene Cixous’ Three Steps on the Ladder of Writing

has been my constant companion for almost 20 years. She starts the book with the letter H – a ladder, but also her starting point – the first letter of her name. For me, it was the first letter of a surname that I had yet to come to grips with. Descending that ladder would take time and experience.

But something that struck me about Cixous’ thinking and writing was the way that she would expose the secrets of writing to the glare of the sun. To the scrutiny of the ever watchful reader. She points out that one of literature’s constant and recurring themes is the death of the woman. We see it time and time again – but the “death of the woman” that Cixous writes of is not the literal, ultimate disempowerment of death, visually and poetically reduced. It is something more visceral:

To begin (writing, living) we must have death … We must have death, but young, present, ferocious, fresh death, the death of the day, today’s death. The one that comes right up to us so suddenly that we don’t have time to avoid it, I mean to avoid feeling its breath touching us. Ha!

But so many writers avoid coming close to the face of death. They shy away from it’s sweet, pungent breath and they serve up the corpse, the lost girl, the fallen angel. These writers serve up death on a platter and name it “accomplishment” – and never once challenge us in our own complicity.We see it every day in crime drama on TV. It’s presented there – in the news – and in the streets where we live. But just because we see it, live it, breathe it – it does not make it art. By all rights, it should make it outrage.

And that’s exactly what I was left with at the end of a recent night’s viewing. It’s not that the writing wasn’t good. It’s not that the performances weren’t great. And it’s not that the twists and turns, the characterisation or the cinematography didn’t result in quality drama. Indeed, Black Swan, was far more than adequate in all these areas.

When Natalie Portman’s character, Nina, was challenged by director, Thomas Leroy (Vincent Cassel), to “be” the black swan, we knew that death was on the cards. To find, to share, to become dangerous with her performance, Nina would need to open the door which would lead to the other side – to that ferocious death that Cixous speaks of.

But for a movie that deals intensely with the creative process – and with the life of an artist on the ascendency – I was bitterly disappointed that when the fork in the road was reached, that the lesser road was taken. Not only did the narrative fail to become its own “Black Swan” in the choice of ending, it did so by betraying its audience. We became witnesses to a crime in which we ourselves played a part – the lights come up, we all applaud and go home.

And we should do this not just for ourselves, but also for the beautiful, complex, challenging and fragile women in our lives – friends, mothers, daughters, wives and lovers.

When I studied theatre, I did so because it was the art form that brought us, moment by moment, closest to life. And if you have been privileged to see such a performance – say Nick Cave, dangerously leering over the edge of the stage, or Norman Kaye in Swimming in the Light – then you will know that there are indeed, moments where the divisions between theatre and life disappear. It’s these moments that I love and why I am also drawn to social media in all its chaos and fresh ferocity – for in our own performance, in our own perpetual storytelling, we speak ourselves into existence one blog post, tweet or twitpic at a time.

If you are going to speak. Speak truth.

As the Chair of not-for-profit youth media organisation, Vibewire, I know the budgetary, sponsorship and resourcing challenges faced by groups who are dedicated to what I call “good works” in our society. So whenever I look at the work of not-for-profit organisations or community groups, it always disappoints me to see them wasting the resources that they have available to them.

So when I started looking for information on Sydney Royal Easter Show, I was disappointed to see paid search being thrown away as follows. 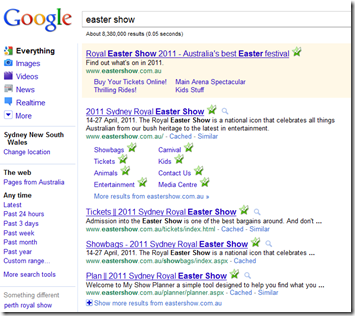 Considering the strength of the organic placement (I used a clean browser for this), this paid piece is like throwing money away. It’s like they ticked the box for “paid search” and moved on to the next piece of their digital presence.

Clearly the Royal Easter Show folks could have spent the paid search budget on the iPhone app that is advertised on their site (can’t be found in the App Store) or in a beefed up community presence on Facebook where the links between website activities and show-based events/promotions could have been easily orchestrated.

While it is great to see people explaining how mums can download colouring-in pages from the website and take them along for entry in a competition – these on/offline activities are the no-brainers that drive loyalty and action. They simply make life easier for your event participants.

And that should be the goal of any digital strategy. Because ease of use drives action. And the best action is ticket sales.

Every week I read hundreds of blog posts. Sometimes they are mercifully short, other times they are compellingly long. Some contain the germ of an idea. Others carry the reader along in the torrent.

Whittling all these down to five must-read posts can be difficult. But I do it in the hope that this is useful to you. This week’s five must-reads from last week are:

Great case study from Graham Brown and YouthResearchPartners.com on South Africa’s Nedbank advocacy efforts around their student-focused financial products. Not only did they gain in-depth student insights into banking trends and preferences – they generated 8,000 sales leads. Not bad.

This is what happens when you have young people representing a brand and creating a fun atmosphere.

Have you ever had trouble being paid by a client? Mike Monteiro, co-founder of Mule Design talks a little about this exact problem at San Francisco, Creative Mornings. But it’s way more than that … I love this quote:

We wanted to pick and choose the clients that we worked with. And we wanted to be responsible ultimately for the stuff we were putting out in the world … We were naive enough to think that we could run a business better than the people that we were working for.

2011/03 Mike Monteiro | F*ck You. Pay Me. from SanFrancisco/CreativeMornings on Vimeo.