Mr Community, Mack Collier, has had yet another busy week — this time giving the Top 25 Marketing Blogs a makeover. From this week, Mack is rating marketing blogs based on Technorati’s "authority" rank rather than the site ranking available through Alexa … and this has drastically reshaped the face of the Top 25 (for example, Kim Klaver’s excellent blog has dropped out of the list — and Seth has finally been knocked from the top spot by Kathy Sierra).

There are SEVEN new entries, six of which are first time entrants. Amongst these are some of my personal favourites — Sean Howard and Becky Carroll. Of course, when the Z-list booster shot runs out sometime around July, we may see yet another makeover. But that is what makes Mack’s list so vitally important — the Viral Garden is like the Viral Watercooler … we all love to drop by for a chat and a gossip — and no matter who is on the list, you can always be assured of good conversation and witty company.

Philippe Deltenre has been doing a series of profiles on marketing bloggers, featuring my good friends Christina (CK) Kerley, Valeria Maltoni and Mack Collier. Each of these profiles make for excellent reading, especially the first question — what was your first blog post.

Philippe has kindly asked me to participate in the next round of interviews … and while he has changed some of the questions, he still asks about the first blog post. Interestingly, when I dug back through my archives I couldn’t find it … until I realised that I had moved it somewhere else.

So here it is … in all its naive glory.

The Servant of Chaos
We begin with a rant. A rumble. A shout. There is more in the mind, more on the fingertips, more spilling from the edges of our quivering lips than can fill the words of a thousand weblogs.
The diaries of the insane, the newly reposessed, the righteous, the deluded, and yes, even I.
The daily diatribe of the left, the right, the religious and informed brooks no argument.
But we will give them one.
You and I.
We will give them one.
There are more to the words of consumers than the corporations expect.
We huddle in groups, in chat rooms.
We explode on the keyboards of a million call centres.
Our imagination is unheard of. Our thoughts cancel out the process.
We are your hearts and your minds.
We are everywhere, all places, all over the shop.
In your blood, at your workplace.
Serving you tea.
Writing you emails.
Escape?
We don’t really want to, for this is who we are.
One.
More.
A new opportunity opens every day.
It opens with the page.
The pen.
Another rant.
In control? Hell no!
We are in slavery to the chaos of our lives.
This is the manifesto of one.
S. 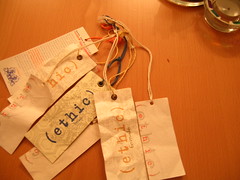 I love a good discussion about marketers and agencies and the way they interact with the great mass of people who consume their work, and there have been a couple of really good posts recently. First up, there is this neat post from my buddy Cam Beck which looks at the concept of "targeted reach" as a form of deep engagement (see the visual and you will see what I mean).

Mark, on the other hand, has a great post about the way that ethics play out in the decision making process. He nicely shows how our personal ethics connect to an emotional brand linkage. So what does this mean for marketers, planners and agency types?

It means [we] will have to start being better at understanding human beings – not just communications.

It is one thing to have ethics and quite another thing to activate these. What I guess we are looking for is a form of ethicette … where there is a closer correlation between our brand/life ideas and the ways in which we put these into practice in our personal and professional lives. Now THAT sounds like a work-life balance with real challenges!

If you have read this post but did not know who Paul Kelly and Kev Carmondy were, then take a look at this clip from the Make Poverty History concert. It also features John Butler.

North Queensland is deeply embedded in the Australian consciousness. It is a wide open, hot part of the country, where you can drive hundreds of kilometres between towns, a sea of sugar cane stretching away on each side of the road. I can remember as a child driving these long hot roads on the way to a summer holiday destination. I can remember being amazed at the train lines that run parallel to the roads, how they were so close, how we would along beside them, with the burning cane far off in the distance scarring the blue skies.

The population in the cane cutting areas are small, and when it comes to harvest time, new workers are required. This cane cutting season, the growers around Mackay are trying something different to attract haul out drivers from an international pool of workers. They are turning to YouTube. The YouTube video takes the theme from the Tourism Australia campaign "Where the Bloody Hell Are You" (which by the way, I disliked) … I think this one does more to tell the story of Australia. 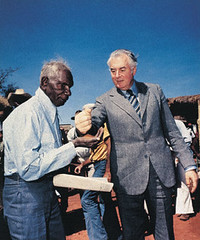 This week, here in Australia, we have been looking back. You see, forty years ago tomorrow, Australia emerged as a nation (not 106 years ago as widely presumed) by voting in a referendum to recognise the citizenship rights of our indigenous people. It was a turning point.

Before this, the Australian Government had put in place a series of policies and laws that systematically disadvantaged and marginalised Aboriginal people. Some of the worst of these included policies that forcibly removed children from their parents (the Stolen Generation), the results of which will be with us for many years.

The year before the referendum, in 1966, a Gurindji man, Vincent Lingiari, led his fellow aboriginal stockmen to walk away from their jobs in a dispute over pay and conditions. This also was a turning point but one which would turn an industrial dispute into a battle for land rights. The story of this story was turned into a song, From Little Things, Big Things Grow, by Paul Kelly and Kev Carmody which captures the emotion and depth of the situation better than I.

The ceremony shown in the photograph represented a high point in Aboriginal-white Australian relations. It has been thirty two years since then, and despite much talking, some "landmark native title cases" and broad-based community activism around "reconciliation", very little has changed. The leaders of our country refuse to apologise over the past treatment of Aboriginal people, there is no treaty or agreement in place, and education and life expectancy rates for Aboriginal people continue to lag those for non-indigenous people.

Australians have always seen themselves as egalitarian … yet we continue to turn a blind eye to the problems that exist in our own backyard. My hope is that another forty years doesn’t need to pass before some of these problems and issues are resolved. Perhaps this fortieth anniversary of this great event helps re-focus and redouble our energies in a way that allows those seeds of hope to grow.

I have been resisting putting this little logo onto the site for a couple of weeks. When I first entered Mack Collier’s Top 25 Marketing Blogs a few weeks ago, I thought it best to wait a month and see if I was still around. And, thanks to you all, it seems that I am. But it could all change again next week … especially as Mack is now changing his ranking approach from next week onwards. He is switching from Alexa over to Technorati … so it could be a very different looking list from here on in!

And if you are new to Mack’s list, it comes out every Wednesday (my Thursday), and it provides links through to some of the most interesting and influential marketing blogs around. Be sure to check out the list and the blogs on it. 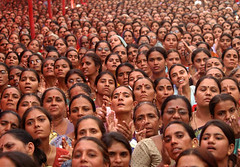 I was not planning to post tonight, but I read this great post by Mack Collier and the title popped into my head. Mack is talking about how a good community evangelist can transform the WAY that your customers relate to your brand … and he provides a great example of Mario Sundar’s new role as LinkedIn’s community evangelist. With a single, strategic hire, LinkedIn have transformed not just the way that the company talks to its network, but also, transformed the MANNER, method and TONE through which its network of members converse with each other and with the company.

But what is most heartening, is that LinkedIn is not just talking. LinkedIn is LISTENING. Even better … action is taking place, feedback is being received and improvements/changes are being made. The feedback loop is working and it is being amplified by a million individual trumpets …

Is this going to drive a unique competitive advantage for LinkedIn? Is it going to re-energise or re-activate low-velocity users of LinkedIn’s services? Is a community evangelist a wise investment?

Time for me to stop talking! 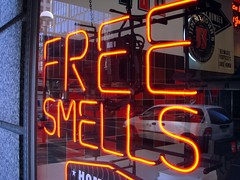 Kevin Dugan sent me a link to the same sign but from a different angle. I love it! Just goes to show what a little perspective can do.

I am sure you know what I mean 😉

Yesterday I was thinking about Katie’s upcoming presentation on digital planning, and in a fit of BSP, Mack Collier comes to the rescue with a thought provoking post over at MarketingProfs. Mack rightly identifies one of the largest failures of marketers to respond to the social media opportunity — treating it like a channel. This is a fundamental error.

You see, what we have happening is some isolated tactical executions designed to activate a campaign. The Nikon D80 social media outreach program is a great example — hand select bloggers of influence, put a camera in their hands, encourage them to use it and post about their experience, and then, at the end, donate the camera or the proceeds of sale to charity. Sounds nice. Sounds clever. But it misses out on one of the key items of a communications initiative — feedback. As CK says, "listening is key".

Of course, once you have feedback, you need to do something with it … but that is a WHOLE other post. But in terms of integrated digital strategy, it seems to me that there are some things that should be considered:

So, after all that, what makes great digital integrated planning? Really it is the desire to NOT STINK. They say that smell is the strongest determinant of memory — so if your social media or integrated campaign is on the nose, we will all remember it for some time.