As usual, there was some great content published last week (and I already have some good fodder for next week!) In case you have not had a chance to scour your RSS feeds, take a look at these five posts to give your brain a kickstart. 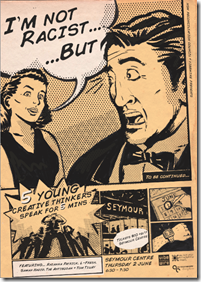 "I'm not racist but …" starts many sentences. But how deep does this go into our psyche? On June 2 at Sydney’s Seymour Centre, Vibewire together with NSW Reconciliation Council will explore the topic with a great line up of young, creative thinkers.

The 5 x 5 minute speeches will be followed by a Q&A session – so come ready with an opinion or at least a bag full of questions. You can book tickets here.

Speaking on the night are:

Rhianna Patrick
Rhianna currently presents the Indigenous radio program “Speaking Out” on ABC Local Radio and is a former member of the Triple J News Team. She was born in Brisbane and grew up in Weipa before moving to Sydney. Her family is of the Zagareb tribe of Mer (Murray Island) in the eastern islands of the Torres Strait.

L-FRESH
Also known as The LION, L-Fresh is a Hip Hop artist and youth ambassador. He has shared the stage with some of the best Aussie Hip Hop acts and international icons, including Nas, Public Enemy, Urthboy, Drapht, Pez, and Horrowshow. L-FRESH is an ambassador of The Street University where he works as a mentor and arts and recreation coordinator of Australia’s largest youth drop-in centre.

The Antibogan
A former school teacher turned sports psychologist, The Antibogan grew up in cosmopolitan Newtown before going to high school in Cronulla where he adopted racist and sexist attitudes from bogan school friends. He spent a few years as a racist himself before coming to his senses and shaking discriminatory influences loose. He soon turned to rallying and supporting various anti-discrimination movements and while he feels more pride at his work within such humanitarian circles, he has attracted the public eye in his work exposing racists and sexists by republishing their public comments on theantibogan.wordpress.com.

Tom Tilley
Tom started at Triple J as a Hack reporter in 2007, travelling right through Australia reporting on everything from pig hunting to federal politics. Tom has reported on two federal elections, the apology to the stolen generations and has paid close attention to suicide and mental health. In 2011 Tom became the host of Triple J’s Hack program.

Samah Hadid
Samih is a youth advocate, performance artist and author. In 2010, Samah was the Australian Youth Representative to the United Nations. Samah was the first Australian to be selected to complete a fellowship in minority rights with the UN office of the High Commissioner. She published a book called The Future by Us as well as studying Masters in Human Rights Law and Policy.

Be sure to come along – it’s bound to be fascinating!

Next month in Melbourne, leading thinkers, change-makers and collaborators from across Australia and around the world are gathering to explore whatʼs possible, and to develop ideas on how we can best solve todayʼs most pressing social and environmental challenges. It’s a great chance to share your brain with some super smart folks!

There are some great participants including:

You can register here. Get tickets while you can!

Once upon a time, we knew who to trust. We’d look to the badge and we’d look to the brand. The institutions in our society carried with them the gravitas and the authority that commanded respect. The same applied to big brands. And then something changed. Something really big.

The best of last week’s reads were heavily contested. I could have easily found 10 posts that would astound you. But in the end I stuck with the five – after all I know how busy you are. Some of these posts are longer than average, but they are dealing with some challenging issues. I trust you’ll find them fascinating.

A couple of weeks ago I wrote a piece for MarketingProfs – Google Gets Emotional When Telling Stories … And So Can You. It showcases a video for Google’s Chrome web browser and talks not about the technology but about the emotional impact of that technology on our lives. It’s a great piece – check it out.

But can you apply the same storytelling approach to other sectors? Of course! Ann Handley shares this great brand story from the non profit sector.

A Love Story… In Milk from Catsnake on Vimeo.

I have always loved finding a new blog to read. There is something in the search and the surprise that really satisfies my curiosity.

Finding new blogs to read used to be relatively easy. There was a period of amplified discovery – where great effort was put into thought leadership, strategy and connection. There was great joy in not just finding, but also in the sharing of websites that tickled our creative brains. It was also fun – learning about this “social type of media” through the act of participating.

But these days it feels like it is harder to find new blogs. It’s not that they aren’t out there – it’s that the categories of content are brimful of good writing already. As readers then, we have to dig deeper – and as writers we have to share the gems we find. We have to remain curious – and also generous.

With this in mind, here are three blogs that I have been tracking over the last six months. Hope you enjoy them! Oh, and be sure to send me other new blogs my way.

Over the years, one particular question is starting to become the norm. "What's our message?" Ok, I would expect this question from a small business or a startup selling something like snail-flavoured crackers. They get an idea, they are passionate about the idea, and boom, they think the next step is for us to crank out a logo or website. Unfortunately they aren't the only ones tripping over this error.

Organizations pulling in 20 million in revenue have the same question. When we are brought in, as goal-oriented graphic designers, the goal should be presented. We should be the creative outlet to communicate the message for that goal, but so many times there is no message to communicate. These companies spend their time focusing on the platform they will use to deliver the message, but not the message itself. It's like choosing a method of transportation before knowing your destination. This may have been permissible when bigger marketing budgets meant more ads plastered everywhere and more revenue, but this doesn't fly anymore.

In a new global economy consumers are harder to attract, and naturally suspicious of your motives. In this market place, simply spewing out gorgeous designs won't do; I can pay anyone with Photoshop a few bucks and get that. We need to be more emotionally and culturally sensitive. Simply jumping on Twitter and Facebook, or creating a "viral" video won't do it, these were trendy at first, but they are quickly morphing into simple distribution channels like web sites, email or texting.

Companies need to press their marketing firms, design firms and other ad teams to focus on goals. As a designer, let me caution the Marketing VPs and Communication Directors out there: Your ad campaign message needs to be established independently of the method of communication. The design should be the very last step. It's not about the method, it's about the message.

Justin Brady is the quick-witted founder of Test of Time Design in Des Moines, Iowa.  http://www.testoftimedesign.com/blog

A little something I put together a while back. I’m sure I shared it with you, but will do so again. Let me know what you think!

You are social media aware. Connected. Always on. But what are you going to do? You’re going to share, right?

This cup of chaos brought to you (and me) by the always sharing Marilyn Pratt and SAP marketing SVP, Susan Popper.