Stan Johnson shares this great rant from Banksy on advertising and advertisers in our society. It’s a little Cluetrain-esq with a more activist angle.

Does he make a fair point? I’m interested to know your point of view … not because it’s inflammatory or because I have a vested interest. How does it make you feel as a CREATOR of content and a CONSUMER of advertising? How do you reconcile this spectrum – or is there even a need? Do we owe companies nothing – or is there some silent, complicit contract or is is a fabrication? 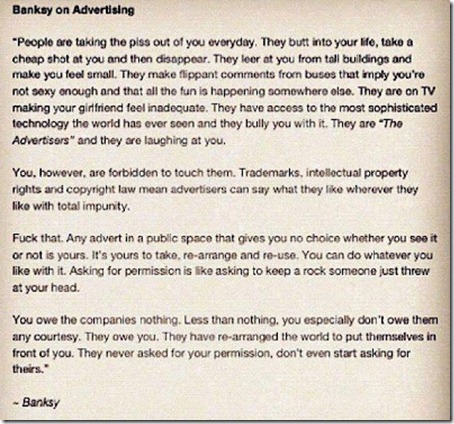 Every now and then, a conference comes along that I’d really like to attend. For me, these conferences aren’t JUST packed full of great speakers – it’s also about the audience. I try to think through WHO will attend, what they will bring to the conference and the potential topics that we could discuss during the event, at ad hoc tweetups and so on.

With that in mind, the upcoming Internet Show in Melbourne is about as promising a conference as we get this side of the shadow of SXSW. It’s two days of jam-packed action – lots of panels, some speed networking – and of course, great speakers like the firebrand, Rob Campbell (always NSFW but essential nonetheless) and Eaon Pritchard (founder of twelevision who promises not to make an exhibition of himself). Check out the full program here.

I am also participating in the event as a speaker. I’ll be talking about SAP’s Premier Customer Network, the power of closed communities and what it means to put a business social network to work.

If you want to come along to the conference, use the voucher code NZDY when you register online at www.internetshow.com.au to get a special rate. For registration assistance, call +61 2 9021 8807.

I hope to see you there!

When you work day-in, day-out in, on or for a business, it’s easy to get caught up. After all, every working moment you are absorbing the brand experience, drinking the kool-aid, deflecting and spouting management-speak and trying that little bit harder to humanise the brand.

But what you end up with is the inside-out view.

And what we really need … what we crave, fear and yearn for is the opposite. The outside-in view is always a jolt to the system – because it impacts what we believe. It throws our own reality into our faces.

It’s why I love this video. Dozens of logos are shown to a five year old and her response is recorded. It’s classic outside-in.

THAT is what we should be working towards. It’s not about the logo. We need to make all that we do about the EXPERIENCE. That way your expensive design work will stand in reference for something. And that’s worth paying for.

When I studied theatre, I fell in love with the practice of directing. I loved doing the research – the dramaturgy – into the play or performance pieces we were studying. I was fascinated with the potential and challenge of interpretation. But most of all, I was captivated by the process of performance – of what it took to coach, cajole, push and nurture people through the process in such a way that they would connect and wow the audience.

Over the next few months, I am giving a number of workshops and presentations at various conferences (you can see my list over at Plancast – and don’t forget, you can book me to speak too) – and this means I have to turn this directorial focus around onto myself. This is easier said than done – especially when you work virtually (ie alone) most of the time.

Over the years, I have learned some tricks to get around this challenge:

Now, these tips are all about preparation BEFORE you step in front of a room full of people. What can you do when you are in front of an audience? Here are some great tips from the rocking Tara Hunt.

How to Rock an Audience: from stage fright to stage presence
View more presentations from Tara Hunt

Take a look through Tara’s deck. Is there something that resonates with you? How do you feel about the Hero’s Journey? How do you apply that to your own presentations? Has this worked for you? Or even better – who have you seen who does this well? Share a video link, please!

The 2012 season of Vibewire’s #fastBREAK series gets underway on February 24 – with the topic U-Turn.

fastBREAK is a monthly series of rapid-fire interactive talks held on the last Friday of each month from 7:45-9:00am at Sydney’s Powerhouse Museum. Each event has five young industry leaders from various sectors exploring the question or topic of the month. These five minute responses circle around the themes of creativity, commercialisation, collaboration, connections and conversation. You can join the fastBREAK meetup community here.

This month’s speakers include:

Robert Beson is the director of AR-MA.  Educated in the United States and Australia, Robert holds degrees in literature, classics and architecture.As an architect, Robert has worked in Europe, the United States and Australia with a number of internationally recognised practices and institutions. His work has been exhibited at the Prague Quadrennial, Gwangju Biennial, and the Venice Biennale.In 2010, Robert was awarded the Byera Hadley Traveling scholarship for research on digital fabrication and production of complex structures. Robert has acted as art director and curator for academic institutions, and lectures at UTS and the University of Sydney.

Ralph Hobbs is Art Equity’s Art Director, Ralph Hobbs has a wealth of experience as an artist, art educator and consultant to art institutions. He holds a Bachelor of Fine Art, Diploma of Education and a Masters in Fine Art and Design. His ongoing studies and life-long passion for art has positioned him as an authority in the industry. Highly regarded for his eye for exceptional art and understanding of what makes an artwork both collectible and valuable is an inherent skill that Art Equity clients have appreciated for many years.

Philip Gomes is an Editor and Journalist for SBS and Cycling News, who started his career as a Tennis Player/ coach. He migrated to Australia from Canada and in that time changed his preferred sports to cycling and triathlons. He is now fulfilling a life long dream to become a writer and journalist by converting online publishing into a full-time career as a journalist and online editor at SBS.

Katherine Tu is an Arts/Law student currently studying at the University of Sydney. She is also the Australian Youth Climate Coalition’s NSW State Co-Coordinator. She is passionate about acting on climate change because she wants to see a cleaner, fairer and more just world. Katherine is also active in social justice issues in general, she has previously volunteered for the Australian Red Cross on International Humanitarian Law, Young UNIFEM, and she is currently volunteering with the Aboriginal Legal Service. In her spare time, she likes to read, travel and try and play the ukulele (but isn’t very good at it).

Unless you’ve been hiding under a non-wi-fi-enabled rock for the last six years, then you will have seen or heard of a TED Talk. This famous conference event has hosted some of the most talked about, viewed and imitated presentations ever seen – covering a wide range of topics and ideas, inspiring millions of people around the world.

But how are the speakers selected? How do you attract the all seeing eye of Chris Anderson?

Well, it seems that TED are putting the crowd to work in an innovative new way – to uncover new talents, voices and ideas that “the world needs to hear”.

To apply, you will need to produce a short video of yourself. Thirty of the best applicants will be invited to audition. You can find out more here.

What/who are TED looking for?

Anyone can apply to audition, so long as you have not spoken at a TED Conference, TEDGlobal or TEDActive, and do not have a talk posted on TED.com/talks. We're especially looking for:

So if you’ve got an idea worth spreading, the auditions for Australia take place in Sydney on May 27. BUT you have to apply between March 19 and April 8. Check out the audition FAQ here and start getting your story straight – because time is running out!

Some weeks I feel like we are actually swimming in information – people are sharing and resharing information, knowledge and ideas, and in doing so, building the wave of information that threatens to overwhelm our meagre senses.

But if you have a good, strong network of clever people – people that you trust, have expertise and are willing to share it – then it becomes easier to wade through the torrent. It is in the curating of content that the rough diamond of an idea can be polished and revealed as a gem. Hope you enjoy these five jewels!

I tend to agree with Olivier Blanchard’s approach to social media ROI – that it is a financial measurement and shouldn’t include various non-financial measurements such as “likes”, comments, interaction or “brand awareness”. That doesn’t mean that these measures are not important metrics for your business or your marketing efforts – it’s that they are not measures that correlate with direct increase in revenue or reduction in costs.

When the team at social marketing platform, Wildfire, surveyed marketers to understand where they were looking for returns, many came back with three main metrics (only one of which is financial):

Obviously, the focus of this survey was skewed towards marketing, but I firmly believe there is significant business value beyond a single line of business (especially for B2B). The challenge is figuring out not necessarily where the ROI is for your business – but where the value building opportunity lies. It’s about figuring out how you and your business can “become one” with The Social Way.

Having some trouble with your teenager? See how one parent turned the tables in his teenage daughter.

Sometimes the week takes off without us holding tightly. So that makes it already Tuesday where I live – and I’m yet to catch up with my long list of Monday to-do items. And I am sure I am not alone, right?

I hope that these five great posts from last week help you catch up with your busy life!