If I had a lazy couple of thousand dollars lying around, I’d love to attend the Climate Wealth Summit next week. To be held at the Shangri-la Hotel, Sydney on July 7-8, the summit is a joint production of Richard Branson’s Climate War Room and Janine Cahill’s Future Journeys.

There’s an impressive line-up – and the event is limited to a small number of executives, investors, entrepreneurs, and leaders from the private sector. You’ll be there with GE’s Commercial Director for Australia and New Zealand and head of the GE ecomagination initiative Ben Waters, former Premier of Western Australia Geoff Gallop and Charlie Finnie, Managing Partner Greener Capital. There are two days of workshops and the event will be opened by Richard Branson himself.

If you use the code CCWAspecial by July 6, you’ll qualify for a significant price reduction ($2000 rather than $3300). But be quick – as these early bird tickets are limited.

And if you do make it along – be sure and tweet it out for me. 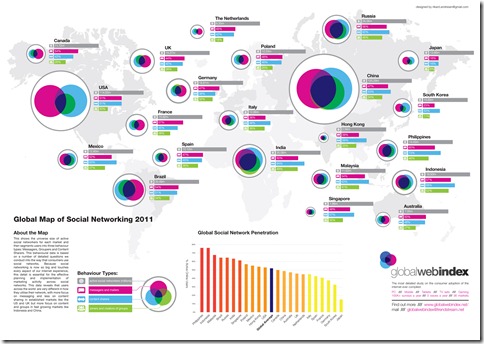 The folks at Global Web Index have investigated the patterns of consumer adoption and pulled together this infographic map. On this scale, it’s easy to see where (and how) trends become markets and how patterns of use become opportunities.

Look for example at China’s massive online population, sitting at 155 million – dwarfing Australia’s paltry 7 million. Look also at the behaviour types – who are the sharers, which populations join and create groups? Then think about how these behaviours impact your marketing:

The data may not have all the answers – but it should prompt some questions for you. Or for your agency.

Whittling down the bulk of great posts into five distinct items can be challenging. As the web evolves, and as we all get better at communicating using it – the quality of thinking and the volume of quality posts begins to explode. These five must-reads are my small contribution to filtering and connecting. Hope you enjoy them! 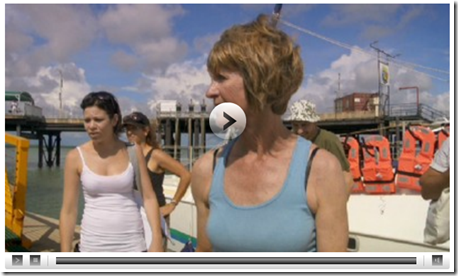 As a rule I don’t watch a lot of television. It’s often not challenging enough or emotionally engaging. But last night as I was prepping for a little writing after an already long day, I spotted a number of tweets about a show that sounded compelling.

SBS’ Go Back to Where You Came From takes six ordinary Australians on a reality TV style adventure – living like refugees for 25 days. In this first episode (with two others to run over consecutive nights), the scene is set, participants are eased into the process, hearing the personal, confronting stories of former refugees now living in Australia. Spending three nights living with these families begins the long process of cracking the hard core of prejudice that many of us blithely live with. But how confronting will this get for the participants – and for us the audience?

In true reality TV fashion, events are orchestrated to emotionally and physically test the participants. We often say that truth is stranger than fiction – and it is clear from this first episode that the reality of being a refugee contains more drama, fear, risk and challenge than many of us, cocooned in the comfort of our armchairs, could have imagined. Just when you think that the participants have been pushed to the limit, they are plunged to a deeper level of discomfort.

And while the show itself is brilliant, there’s also some seriously good social media integration around it. You can view the show online (which was perfect for me as I missed the first few minutes). There’s no waiting 24 hours etc. I think there is a problem with viewing via iPad, but the immediate availability of the show allows late-comers to still engage. Brilliant work from SBS.

Then there is the Asylum: Exit Australia simulation, an interactive quiz, interactive school resources, teachers packs and feedback forums.

It’s not just must-see TV – it’s a model for the future of what content publishing should be.

I can well remember the excitement of seeing my first piece of writing in print. And yes, even in this age of easy access to web publishing and on-demand printing, there is still something visceral that comes with your own name in print. On a page. In a book.

And that’s exactly what Vibewire is now working on. Their quarterly anthology captures captures the short stories, articles, art and photography drawn from the Vibewire community. And you can help make this a reality! By supporting the Vibewire Anthology you will not only receive a beautifully produced edition, you will be providing vital support for young people starting their creative careers. Isn’t that what we all wanted way back when?

Now, this is a great way to get your company known. Go-Globe.com – a web design and application development company have produced an infographic that shows what happens on the web every 60 seconds. Take a look. Think about what this means on a practical level. Think about the scale. Then think that everyone of these items is an opportunity for a conversation. That’s what I call the real time web. 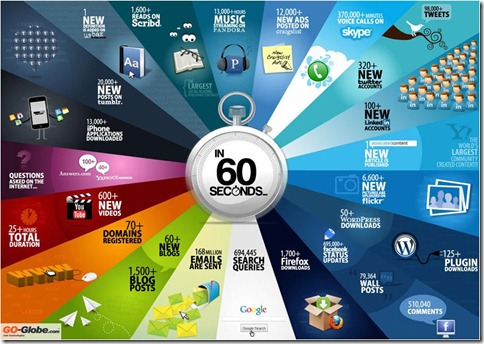 We often read about the death of blogging, or publishing, or the plateauing of Facebook – but most of these announcements don’t actually engage with the underlying issues. They don’t address our sense of digital belonging or the reasons why social network find and then lose favour. The five must-read posts from last week provide some important thinking on this particular subject:

Almost every day there is another way that social media encroaches upon our businesses. It could be a new technology designed to help us reach new customers or something to help us target buyers more accurately. It could be a new device, some software or a must-have community building platform.

Similarly, in our so-called “personal lives”, we are seeing a blurring of the boundaries – between home and work, work and play, friends, colleagues, connections and family.

But while many of us have been weaving social media into the fabric of our lives, most businesses are at the very beginning of this process. Their efforts are ad hoc, barely repeatable and hardly defined. There is confusion, miscommunication – and even misinformation.

So what then would be a model that enterprises – large scale businesses – could look to? I thought I’d try my hand at putting a “social business maturity model” together. Running vertically are the five stages of enterprise maturity. Each of these stages have key process areas which provide milestones and evidence capabilities that mark the transition to a new level of maturity. It’s a draft, but I’d love your input and suggestions. How can we make it better? What would you add or change?

I’ve just spent the last weekend immersed in the deep thoughts and creative actions of a hundred or so social innovators and business activists at the inaugural Gathering11. Organised and curated by the unstoppable David Hood, it brought together people from all around the world – Ralf Lippold, Venessa Miemis, Christine Egger, Michel Bauwens, Jean Russell, Annalie Killian, Tim Longhurst, Stephen Johnson and a host of others (more links, names and ideas to come).

It was one of my personal highlights to spend time with the brilliant and personable Ray Wang and business strategy guru and big wave surfing passionista, John Hagel. I even got to brainstorm with Adam Bandt during a World Cafe workshop.

There was much to enjoy, think about and act upon at this two day conference. I am still processing much of it – but one thing that I liked was the chance to articulate, raise and express the questions that we have for the future. Where does the environment fit in? What will our work and personal lives look and feel like? What’s the role of governments and institutions?

Many of these questions came from the participants themselves – and were captured in photography by Courtney Crow below. Do these questions resonate with you? Was there something we missed?

Over the coming days I will be sifting through my notes and thoughts and writing up some ideas. There’s more to come. Don’t forget to check out the Gathering11 site.

Sometimes there really are customer that you DON’T want. The Alamo Drafthouse Cinema in Austin, Texas asked one theatre-goer to leave after texting too often during a film. Later she called and left a voicemail. The folks at the Alamo shared this on YouTube.

It’s a little #nsfw – so put your headphones on.