Today is Quit Facebook Day – and I am in two minds. On the one hand, Facebook has been great, I have been able to easily connect to people all over the world, keeping in touch with their daily updates, their photos, the changes in their lives and the things they are reading, watching and thinking about. And it is not that I can’t do this in other ways, it’s that Facebook made it so easy for me (and for them).

But on the other hand, I have been a marketer and a technologist for over 20 years, and when I look at Facebook, I see a goldmine. I can see millions of people logging on, interacting, sharing their interests, their behaviours, their likes and dislikes not just with their “networks” but also with Facebook. And maybe even with Facebook’s partners. It is this latter form of sharing that concerns me.

Anyone you speak with will have a view of privacy. Governments create legislation to enforce minimum standards on businesses, individuals join “do not call registers” to maintain some distance from brands and marketers and all the while, commentators announce the “death of privacy”.

Clearly as we shift more of our behaviour to the web, it becomes searchable – the great Google web spiders reaching out and collating the minutiae of our lives like the all-seeing eye of Sauron. If the Devil is in the details, then the scattered breadcrumbs of our online lives provide more than just a glimpse into our behaviours – they can be aggregated into patterns, codified and predicted.

This is even more pronounced in the walled garden of Facebook where our tastes and interests can be fed back to us – by Facebook ads, recommendations and suggestions. Take a look for yourself – create your own Facebook ad and you’ll see how minutely targeted your personal advertising campaign can be.

What Facebook are doing is pushing its members to allow ever more public access to our private information. It is doing so, not out of some grander view of the shifting nature of “privacy” as CEO Mark Zuckerberg would have us believe – there is real money to be made. As Chris Saad points out:

Most of Facebook's very mainstream users, however, still just want a private place to keep up with their friends and family. In short, the economic interests of the service are not in line with the interests of its users. Despite this, Facebook has been forced to smashed big cracks in its privacy blanket and started forcing its users, en mass, to adopt more transparent and public online personas.

Forrester analyst, Josh Bernoff suggests that Zuckerberg may well be right – that privacy isn’t a cultural norm anymore. But my view is that those active in their concern over these changes at Facebook are well ahead of the mainstream – that the issues presented won’t impact the early technology adopters in a significant way (after all, the Reclaim Privacy site has been doing a roaring trade for weeks). It’s the other 99% of Facebook’s 500 million members who are either confused by the changes, unaware of what the impact will be or simply don’t engage with these types of issues.

The Bait and Switch

At the end of Simon Mainwaring’s article on this subject he asks the question – “do you believe Facebook is to blame for a bait and switch?”. To that, I’d say yes. What was on offer has now materially changed.

For most of us, joining Facebook meant entering a social compact – we’d share the content, context and contacts of our lives – and we’d do so using Facebook’s social networking platform. We’d be able to control who had access to what we share and Facebook could monetize this in ways that worked in good faith. Accordingly, we (the public) joined en-masse. We tagged ourselves. We made Facebook the #1 photo sharing site on the web. We made it the largest social network in the world. And we helped it to transform from a bit player in the crowded social networking space to it’s leader.

Changing this compact now is difficult – and has not been communicated well. Rather than being transparent about their intentions, Facebook have opted to spin the changes, suggesting that the world has changed and that Facebook is moving to accommodate this.

As Bruce Nussbaum suggests, Facebook’s challenge is not to do with the purchase or products or services, but the exchange of value in what has become a cultural product.

Ownership in the social media world of networks is different from selling products and services in the traditional marketplace. Understanding the underlying cultural context of "free," "gift," and "creation" is important to businesses, including and perhaps especially high tech companies. It is not impossible to monetize that which is free. Apple did that with 99 cent songs on iTunes. But it is difficult.

I am always amazed to see that social networking sites such as Facebook (and to a lesser extent, Twitter) undervalue or misunderstand the importance of trust and transparency in the prosecution of their businesses. The TRUST that once existed between Facebook and at least some members of its user base has been seriously damaged in recent weeks – and the Quit Facebook Day is yet another milestone that will be marked.

I have a feeling that the Quit Facebook Day will come and go without a great deal of impact. At least initially. But for me, it is a turning point. It is the day on which Facebook reached its zenith – and from here the long, slow slide from prominence will begin. It happened with MySpace (which of course is still around). It happened with Friendster. And it will also happen with Facebook.

And now, I am off to delete my account. It will be replaced with a business account to manage aspects of my work – but the connections, the flavour and the personality will disappear. It’s time to find a new way to share.

When we hear about the BP Oil Disaster – it is difficult to get a sense of the scale of the impact. But what if we could superimpose the spill dimensions on a map of your local area? What if it was possible to take the data from the National Oceanic and Atmospheric Administration and mash it up with a Google map?

Andy’s website does just that. You can choose your location and show just how far the slick would extend up and down your own coastline. 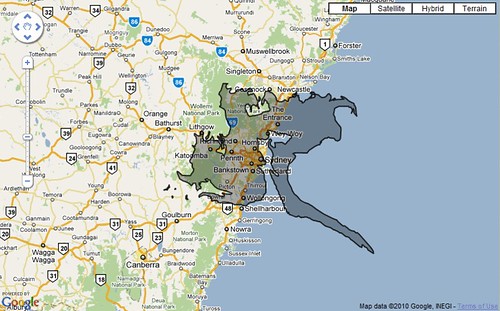 In this image we can see that the spill would reach from Newcastle in the north to almost Shell Harbour in the south. It would reach as far as Cessnock in the Hunter Valley, extend over the Blue Mountains to Lithgow and reach far out to sea. If you wanted to drive from north to south in a car, it would take you about four hours at highway speeds.

If this happened on your doorstep, do you think you would consider it a spill – or a disaster? Would you take it personally? I would.

I don’t know if I would velcro my iPad to my motorbike, but some of these other options are kinda cool!

I have written many times about internet censorship, but in case you have not heard – censorship is a bad idea.

The Australian Federal Government is about to introduce mandatory internet filtering. If implemented it will make Australia the most heavily censored country in the western world. They’ve told us it’s to protect the kids but the truth is it doesn’t. By telling your mum the facts you will help her realise that if she really wants to protect kids online mandatory filtering isn’t the answer.

To learn more – and to find out how best to explain to your mum just why internet censorship is such a problem (and no it won’t stop child pornography), take a look at the It’s Time to Tell Mum website. It’s in all our interests.

If you’re connected, you’ve seen the symptoms. Reputations are being built on the good will, personal standing and generosity exhibited by individuals, not because they want something, but because they have something TO GIVE. To share. And as these people come together – for a cause, for a moment or to make a lasting impact – they are at the same time, transforming the notion of collectivity. Gone are the happy-hippy communities of the 60s. These uber-connected communities are imaginatively grappling with the very notion of economics, of consumption – and innovation.

These communities are forming almost moment-by-moment, sustaining themselves on principles not rules. They say much about where we belong. And who we belong WITH.

In the coming months, you’ll be hearing a whole lot about collaborative consumption – the new book by Rachel Botsman and Roo Rogers. In What's Mine Is Yours: The Rise of Collaborative Consumption

, the two authors track the rise of personal reputation and the way that trust between strangers is enabling new forms of commerce, consumption and collaboration.

Check out the video below for a taste of what’s to come. Maybe you’ve seen it already. Maybe you’re part of it. But without a doubt, you’ll want to read it and find out more.

What we loosely call "social media" is built on shifting sands. When I first started blogging what now seems like eons ago, blogrolls were a hot topic. Even now I still get the occasional email from someone asking for a “link exchange”. (And if you are reading this, please note, I will link to you as long as you write something worth reading.)

Blogrolls – those long lists of websites scrolling down the side of a blog were the equivalent of gold, achieving four things at once:

Over the last couple of years, the practice of updating and actively managing a blogroll has fallen away. In my case, it is to do with the sheer number of quality blogs that I read – I have effectively moved my blogroll to a feedreader – so it no longer functions as a roll call of my favourite blogs.

However, the remaining points hold true. Inbound links are still important for website rankings, creating context for your readers via links to other sites is essential and in the great sea of anonymous web analytics, it’s great to know that YOU read ME.

So it is in this spirit that I am making a concerted effort to update my blogroll. Today I will be adding the following blogs to my long-neglected blogroll.

For those of you have missed it, a fake Twitter account has been setup under the name @BPglobalPR. At the moment they have almost 6000 followers – but this is bound to grow given the quality of their incendiary and humorous tweets (as shown).

Will this cause more noise? Will it generate action? Is the unfolding environmental disaster being echoed across the internet? Truly this is a cup of chaos worth following.

This week there’s a mish-mash of ideas, images and presentations. There’s food for thought, stimulation for the senses and some short, sharp shocks to kick start your imagination.

Wherever you look across the social web, you are bound to trip over some aspect of Facebook. Whether it is a NFP using Facebook ads, pages or marketplace, or blog posts questioning the changes to the privacy arrangements, there is no doubt that Facebook as a platform, tool and yes, a social network, is a hot topic.

But it is notoriously difficult to get face time with Facebook – especially here in Australia. So if you are like me, you’ll jump at the opportunity to spend some quality time with Paul Borrud, Head of Facebook Australasia.

Siobhan Bulfin, energetic organiser of the ConnectNow conferences, is hosting a breakfast on June 3, 2010 in Sydney. Tickets are $50. You can book via Eventbrite.