In social media, we are often told to “listen first”. But what does this really mean? For most people, the reality is that we “monitor” – brands, products, people and so on. But, for me, monitoring is only the first step. It’s the most basic thing that you can do to begin showing your customers some respect.

But monitoring is done in silence. It’s a form of brand voyeurism.

Oh and you can always follow my How to Listen chart. Enjoy.

This week it was hard to keep to only five posts – there certainly seems to be a glut of good reading available – from some of the big industry blogs right through to the unique, lone blogger. Hope you enjoy the variety on offer this week – and let me know if you found something else worth sharing!

I’m always buying gadgets of some kind or other. Sometimes they are things I will use for work, sometimes it is software. Sometimes it’s just something fun – or that I “always wanted”. But rather than keeping it to myself, I thought I’d share it with you – as part of myGadget Weekend posts.

I can remember when we thought the “paperless” office would be a revolution. Unfortunately it just seemed to create more reasons to print more paper.

But these days we are more used to reading (and comprehending) information on a screen. Even still, my desk still seems to be littered by paper, pads, pens and other paraphernalia. It’s part of my creative process. Or so I tell myself.

The soon to be released ExoDesk may change all that. Turning your desk top into – well, a “desktop” – this looks kind of cool. And at $1299 it’s not badly priced. The only problem for me would  be finding a spot for all my paper and other junk.

While recently presenting at the SocialMediaPlus conference, I had the opportunity to spend some time with my colleague and fellow blogger, Michael Brenner. It was great to hear, first hand, the work that he has been pioneering with a large global organisation such as SAP – but it was equally interesting to learn of how this is changing his own thinking and professional approaches.

Michael constantly spoke about personal innovation – about the way he was making business personal – and also more social. He is constantly connecting with people all around the world, opening conversations around what it means to be a “social business” and then working to turn this into an operational reality. It is, he explained, a constant process of showing, tracking, engaging, educating and involving people at all levels – from executives and decision makers down to the newest of interns. And at the heart of this is conversation.

But what does it mean in reality? Michael suggests that you’ve got to first turn your lens onto your own marketing efforts. “The fact is, most marketing sucks”. And as he points out in this presentation, it’s not really a question of how to integrate social media into your marketing mix – it’s about transforming the way you do business. And a hint: it comes down to DOING.

Do you consider yourself an average person? Do you do the average things that other average people do? Do you behave a little above or below average?

I only ask, because it seems that average people all over the world are spending a more than average amount of time on Facebook. And this infographic from the folks at JESS3 makes me wonder – do you consider yourself average in this same way? Does this social media diet sound like yours? And what, really, does this tell us about ourselves. Think I may need to get out more – as it seems there are all these friends that I have never met. Maybe we should meet for coffee. Let me know 😉

Customer loyalty programs are funny things. They often walk a fine line between promise and flattery, between exclusivity and exploitation. These programs are laced with words and imagery that reinforce the sense of entitlement, achievement and reference “awards” and benefits.

But in a socially connected world, awards, entitlement and even exclusivity can be turned on its head. Right now, Qantas is at the heart of this new brand experience.

A few days ago I wrote What Qantas Will Learn from its Social Customers. There were five key lessons:

But things have progressed, and by “progressed” I mean “become worse”. Yesterday’s promotional efforts using Twitter and the #qantasluxury hashtag have been widely regarded as a failure or PR disaster. But I think it goes deeper than that. It’s a malaise that goes to the very heart of the brand and the disconnect between Qantas the brand and its customers.

You see, social media can become damaging to your brand when you ignore the real messages of social media – the wide cultural and personal transformations that I call The Social Way. Without understanding and translating these into your business the gulf between your brand and your customers will continue to widen. If Qantas (or their advising agencies) had understood, for example, the Five Stages of Social Media Grief and had applied this to understanding their customers, then perhaps, #qantasluxury could have been a completely different campaign.

What we are seeing is a widespread “falling out of love” with the Qantas brand. And with this comes a sense of loss. Grief. The Australian public and travellers, in particular, are having to come to grips with a changed reality – where the relationship and trust that they once had in the Qantas brand has evaporated through purposeful direct action of the Qantas management and Board. 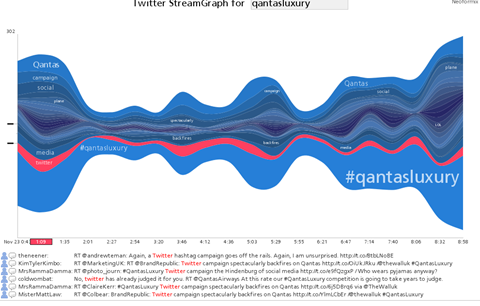 And when the audience, formerly known as “Qantas Customers” have not yet moved into the “acceptance” phase of the grieving process, any brand activations must be carefully considered, planned and executed.

The Twitter stream of conversation (as shown above) seems to be still accelerating and now #qantasluxury appears to have been awarded the ultimate social media honour – the production of its very own Downfall spoof (see Parodies in this Wikipedia entry). When your customers go to the trouble of producing media like this, it’s the equivalent of entering the social customer hall of shame. It’s not an award that Qantas would like, I am sure, but I have a feeling there is still a way to go before this peters out.

Today, Qantas launched a Twitter-based competition. Perhaps underestimating how much damage has been done to the brand in the wake of the recent lockout of its workers, the vocal Twitter community hijacked the campaign and have been busily reminding Qantas management (and Board) just what negative brand sentiment can translate into. Clearly, Qantas has not learned from their social customers.

But what does it look like when this happens? How is it expressed?

Tiphereth Gloria has done a great job monitoring the situation and pulling out a number of key tweets across the day. Using Storify, Tip shares and amplifies some of the most salient points.

We used to say that the only thing worse than being talked about is not being talked about. But does this apply in a world where personal recommendation trumps brand allegiance? It seems that this Qantas saga has some way to run – with Fair Work Australia now required to produce a binding outcome which could still take months. And the question on many customers minds has to be – who at Qantas has their eye on the safety, customer experience and  brand value of the business? Clearly not the Board or the CEO.

The Customer Collective is an independent, moderated blogging community focused on sales and marketing executives. Its sister site, The Social Customer focuses on customer service practitioners. Both of these sites operate under the SocialMediaToday umbrella and take contributions from bloggers, writers, thought leaders and practitioners from all around the world. You can automatically share your blog posts via RSS or write exclusive articles directly for the community. It is a great way of sharing your knowledge with a broad, yet business focused audience.

I was recently invited to join the advisory board of The Customer Collective/ The Social Customer and am excited to be joining a respected group of marketing and sales practitioners. Be sure to check out their blogs and Twitter channels for razor sharp insight and quality conversation!

I was a little deluged with busyness last week, presenting at the SocialMediaPlus conference in the US.

That meant that I missed last week’s update – but there was some pretty good material that will feed your brain, so this week’s list is a combination of great reading from the last two weeks.

Each year the ignite conference runs events around the world. These short form conferences allow speakers 5 minutes and 20 slides to tell their story. It’s a challenging and dynamic format – the slides auto-progress each 15 seconds – so it keeps the speakers and the audience on their toes.

But many of us find the idea of public speaking confronting. What would we speak about? And then there is the time – five minutes is such a short period of time, right? In this 5 minute Ignite talk, Scott Berkun reminds us that the Gettysburg Address – Abraham Lincoln’s famous speech (“four score and seven years ago …”) – takes only two minutes to deliver. He also explains where you can find your story (hint: you already know it), how and why you should share it, and why you’ll be good at it.

Check out the video, then look for the next Ignite in a city near you.