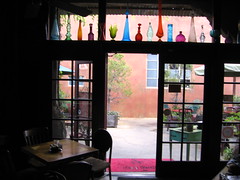 Looks like I will be in Orange County on Friday. I have had a little look around the web but have not seen any coffee mornings posted … anyone know of coffee action in OC?

Let me know if you do!

The dream was intense. I was jumping between the number 66 and 67. They were merging together, skipping and jumping across my vision. There was no sound, only intensity.

Periodically I would half wake and the dream would skip. The numbers changed … this time a larger number, still intense and jumping up and down, not changing, just vibrating. The number 11037. Eventually I forced myself awake, listening for sound in the quiet house.

I repeated the numbers over to myself, thinking that I had to remember them for a reason.

Then here they were, just a day or so later … 67 which was my seat number … 11 which was the flight number and 37 which was the gate number. I think I might just take your advice Ian and Sharon and buy a lottery ticket!

On the weekend I woke from a nightmare dominated by numbers. And today I looked down at my boarding pass to see those same numbers! Weird! And a little spooky!

chicago from the plane
Originally uploaded by mischievous meg.

OK … so this is not my photo … but I have an unexpected trip to Chicago this week. Heading off tomorrow and it looks like I will be around most of the week by the look of things.

I am expecting a stream of client meetings, late nights and busy days but hope to catch a few people while I am there. Now, I have got to sleep … I am tired from travelling already and have not even left my own country yet. 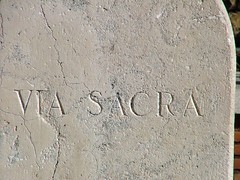 Via Sacra
Originally uploaded by nic_and_nath.

The phenomenon that is Sacrum continues to grow … he is like a one man Z-list. Nedra Weinreich has a Featured Post over at MarketingProfs that provides a nice snapshot of Marcus’ efforts and approach and simultaneously contributes to the growing debate around authenticity and what is "fake".

I am looking forward to Mike Wagner entering the conversation!

It is easy to get carried away with the latest posts on blogs … we love the currency of ideas and conversation. BUT the blogosphere also holds gems of great value. This one is from David Armano and is called a Blog’s Eye View. Viewing this again today made me remember why DA is known for his generosity as well as his intelligence — must see viewing for experienced and novice bloggers alike. 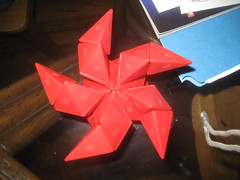 Some time ago Roger von Oeck sent me one of his Ball of Whacks to take a look at. It did take some time to arrive (shipping to Australia seems to happen via the moon), but since it arrived it has been sitting here on my desk, slowly becoming a source of attraction.

I have been fascinated to see the way that people are drawn to the Ball of Whacks. Often someone will be sitting talking to me and absent-mindedly reach over to the ball and start rolling it in their palms. They will toss it from hand to hand and then … as they feel its weight, they begin to squeeze, gently, savouring the way that the ball moves and adjusts to the pressure.

Suddenly, bang! The ball explodes in a burst of colour and energy. No matter how often someone does this, it is always the same reaction — wow! Sorry …

I always laugh and watch as they scurry around the floor collecting the remnants of the ball from under desks and filing cabinets. Then, as they place that last satisfying piece back into the whole, I suggest that this is an important part of the creative process … to play and wander creatively and be open to ideas when they come. And hopefully, when they do, they will come with a bang, or as Roger would say, a whack!

Today, I read Roger’s 100th post! It seems like only yesterday that he launched enthusiastically into the blogging world … and now he is a mainstay for creative thinkers around the globe. And to celebrate, Roger posts an interview with the too-clever-by-half David Armano. Some great questions and some great answers! Now, I just need to see DA in a photo Nacho Libre style! 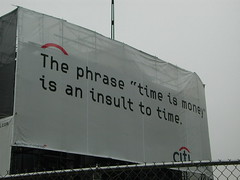 time is NOT money
Originally uploaded by LivornoQueen.

Maki over at Dosh Dosh has a great post that talks about building community. Well, the focus is on making money … but the intent behind this is to establish, build and maintain a community of readers.

The thing that interests me in all this, is how "up front" these bloggers are. They make it clear that their intention is to make money. And trawling through the Money Making category of the Z-list shows that there is a vast network of blog sites that all have this similar aim in mind. But what I like about Maki’s post is the attention to detail … looking at the things that you need to do to attract, keep and consolidate a user community. There is a great quote from Kathy Sierra:

Maki’s blog, Dosh Dosh, really does live by this rule. Take a look at the site to get a sense of the content — there is thin slicing style content on a range of money making activities; tips and tricks on paid linking, paid surfing and a range of options in-between. And running through the comments, you get a real sense that this site is unlike any other … it is a site that aims to make money by helping you build a community. 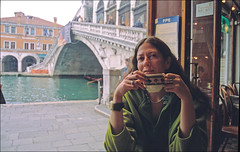 I don’t know if anyone is interested since the Coffee Morning Queen is away, but I will be trying my best to be there for coffee in the morning? Especially because Kirsty is around — even though she may not make it. Can you believe it, she is here for one and a half days? How is that for a rushed trip?

So, where is it at? For those early risers and inner-city types, come on down to:
Single Origin
Cnr of Reservoir & Mary
Surry Hills

Oh, and I just had to use this picture because I am sooo jealous!

I’ve been addicted to you..
Originally uploaded by interpreter.

It has been a long time between drinks, but I have finally written another post for MarketingProfs.

There seems to be a bit of conversation around at the moment on friendships and authenticity (and hey, DA, when we DO finally meet, I am giving you a hug — one of those manly slap on the back kinds, but a hug nonetheless), and this post was one that I had wanted to write for a month or so.

Hope you enjoy it!