I mostly use Twitter for "listening" … I scan the conversations from time to time to gauge what is going on in my personal universe. From time to time I will join in the conversation, but often my response is delayed due to working patterns, time zones or even the volume of information that passes through my Twitter feed. What often happens is that I will find a link of interest and then I will write a couple of sentences and save the information as a draft here on the blog. Later, when I have time, I scroll through the back catalogue of unfinished blog posts and finish it up. Here is one of those posts:

Learn Web Development with 100+ Free Courses
Today a tweet grabbed my attention, though it really could have just passed by. Paul Terry Walhus points out this great listing of free courses on web development available on the net. It is broken down into category areas such as multimedia, development, design and so on, making it not only a comprehensive list of resources but a usable one as well.

For me, the Servant of Chaos blog is a personal scrapbook of ideas … I use it to work through concepts, to engage in debate and to capture the fleeting moments in time where the world and I collide.

I would love to know 😉

With these words, the much loved Marcus Brown waved farewell to the Web 2.0 world, handing in mulitple resignations for the Kaiser, Charles Stab, Sacrum and the Lord God Almighty. If you even read blogs anymore Marcus, enjoy your new incarnation — Marcus Brown 1.0. You will be missed.

Regular readers will remember that I gave this presentation to MBA students at the Macquarie Graduate School of Management last year. It seems relatively popular with the students as Dennis Price keeps asking me back again. One of the themes that I explore is the idea that MARKETING is shifting. While we still have the useful models around B2B (expensive, custom offerings to a niche market) and B2C (high volume, mass market offerings), the new model that I see emerging is a new B2C — brand to community.

To demonstrate this in action, the presentation has actually evolved into a case study around social media, technology and the Age of Conversation (with a little Interesting South thrown in for good measure). But there are plenty of other good case studies which could be extrapolated. Take a look and let me know your feedback — I will make sure to reference you in the next version 😉

This time around (at least in the talk) I feature a whole heap of Flickr photos (all referenced in the deck) and the following bloggers: David Armano, Katie Chatfield, Joseph Jaffe, Jeff Jarvis, Drew McLellan, Ryan Rasmussen, Matt Dickman and Sean Howard.

Increasingly I am picking up good links and pointers via Twitter. One of the many people I am "following" sends a message out and it appears on my screen. Sometimes this is immediate (if I happen to be online and watching as the message comes through), or it can be delayed (for example, I scan my friends timeline for interesting news and observations each morning). But the good thing is, it is completely opt-in — you can choose to "listen in" to the Twitter channel or you can opt out. Furthermore, you can choose to engage in conversation — jumping in to the twitterstream at any moment.

Following a tweet from David Armano, I landed on the Addictomatic site. Of course, I did a vanity search — but to my surprise, I uncovered material that I did not know existed (I thought I kept good track of my digital self). There were tweets about me (I searched for "Gavin Heaton" rather than "servantofchaos"), blog posts and even movie clips. And one of those caught my eye …

As part of the MyOovooDay experience back in February, Drew McLellan and I held web video conferences with a number of people happy to talk about the Age of Conversation. Unbeknownst to me, Paul McEnany recorded part of the session … and here it is. It records some of our discussion about what was then the "upcoming" plan for the Age of Conversation 2008 which is funny in retrospect. In the video you will see (from top row L-R) Luc Debaisieux, Gavin Heaton, Drew McLellan, Kris Hoet, Paul McEnany and J Erik Potter.

This is one for the scrapbook. A brand that delivers on their promise — online and off. Courtesy of a tweet from Ian Farmer.

When you think of a brand, what word pops into your head? What about your favourite products — what word? As a marketer, I often wonder what this one word would be … I wonder whether the messaging that has been constructed is cutting through and whether it resonates with people.

More importantly perhaps, is another question — do these messages build on or extend the experience of the brand? In particular, I am interested in understanding whether people adopt these words as a way of describing their relationship with the brand — and if they do, great. The importance of this, is that the foundations of our brand’s story lives in the WAY in which your brand is experienced. It is not about the MESSAGING or even the DESIGN appeal, but in the way people construct their STORIES of using, engaging and even consuming your brand. After all, every experience is captured as a story.

Think about it … what is your best childhood memory? To explain to me, you need to tell a story. You will have told this story to yourself many times over the years. It will have been reinforced. Changed. Revised with new insight and knowledge. But it is the story that captures the ESSENCE of the experience. And this is why messaging is still important — it provides a framing device around which (hopefully) people will interpret their experience with your brand.

This is why I find Noah Brier’s Brand Tag experiment so fascinating. First up, you observe a logo and then enter a single word response describing that brand. You can do this for as many logos as you wish. But then, the best bit — you can browse the brands and see the responses as a tag cloud — with the more common descriptors shown in large type.

Now, here’s a challenge to all the marketers out there … write down three words describing your brand. Go to Brand Tags and browse to your brand’s tag cloud. How prominent are your three words? Hmmm. Scary.

In the tradition of Marry Our Daughter, the Child Trader website is now open for business. Now you have the opportunity to trade that difficult or problem child for a sleeker, more compliant model. Simply login and begin bartering.

The site has a handy FAQ which answers many of the questions you would never dare to ask — including this one:

My child is pretty run-down. Should I still consider trading him/her?
Yes! One man’s garbage is another man’s gold, so don’t count your kid out of trading eligibility just because of bad skin, awkward arms or thick glasses. Many parents find these traits adorable in trades, especially if they find their child too handsome, too athletic or too intelligent. Do you consider those bad traits? Some trading parents do.

As with the Marry Our Daughter site, this one challenges both taste and morality. The scary thing is, that some people may well think it is legitimate.

While I guess this is really one for the geeks (and the Star Wars geeks in particular), this R2D2 projector by Nikko Home Electronics really does have some utility. Not only does it include a projector for your DVDs, it has ports for your PlayStation, xBox or Wii consoles, inputs for video cameras, flash drives and even a dedicated dock for your iPod. It gives you a lot of flexibility in terms of where you need to place your home video projector — you just use your Millenium Falcon remote control to move R2D2 to the place you want to watch your movie. Though, if you are like me, $3000 may be a little steep.

However, this could also be an uber-cool accessory for your corporate boardroom. Either way, it will make your next presentation/movie night something to remember.

Not quite the "Dance of Shame" from Pylea, but c’mon. We’ve all been there. Hold your head up high. With thanks to Paul Isakson. 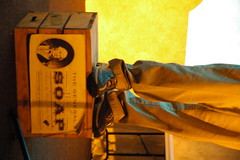 Standing on the Soapbox
Originally uploaded by hub-bub

During the twentieth century, Sydney’s Domain was host, each weekend to a variety of impromptu lectures. Known as "Speakers Corner", anyone with a point of view could go along and speak to the passing crowd. Some speakers became well known and built up a following, while others were more casual, comic or plain ridiculous. Sometimes the Speakers Corner would turn into a hotbed of debate and discussion, other times it was just diatribe — it depended on the mood of the times, the audience and the speaker.

Many speakers, to give themselves a little more prominence would bring along something to stand on — often a soapbox. They were of sturdy constuction, easy to carry on the train and could take the weight of the speaker for hours on end. So popular did the soapbox prove that a common saying entered the lexicon — "get off your soapbox" — a comment called by the crowd to taunt the speaker.

In many ways, this tradition has much in common with blogging. Bloggers put forward their views which attracts (or repels) an audience. Some readers participate in the debate or drop by to listen before moving on. But there is also a large divergence between "soapbox speaking" and blogging — and this is based around the movement from talking/discussion to action.

If you are a blogger you are bound to receive pitches from PR agencies and comments from your readers. Some will be well researched and others will be dismissive, cursory or even rude. If you are a reader you will have favourite writers that you visit regularly and others who you disregard. But with social media there is not a simple connection between speaking and listening. The velocity with which thought becomes action has never been faster.

For example, Geoff Livingston shares his exasperation with bloggers, PR folk and readers in this excellent post that challenges both the "PR people shilling for long tail hits about crap, and mean cranky bloggers who think hiding behind a keyboard with a decent Technorati ranking is a license to act like jerks". He shows that by looking beyond the shadow of our egos that we (and he means "the greater we") can actually work to achieve an outcome.

So think about this. When you want to fire of a flame comment or a nasty blog post — who are you hurting and why? And if … IF you could put that time and energy into something constructive — imagine what the result would be. AND now that you’ve thought about it, get on with the action. Get off your soapbox, there’s work to be done!