A couple of months ago, I asked to sit on the Digital Panel for the Australasian Writers and Art Directors Association (AWARD) Awards. I met with with Co-Chairman of Publicis Mojo and Chairman of AWARD, Craig Davis and was fascinated to hear first-hand about where AWARDs were heading and why. As he explained to Campaign Brief:

Our mission is to champion commercial creativity and we're very ambitious about it.  We want to build far greater value into being an AWARD member.

But I was interested to see how this vision would play out in reality. What would it mean to participate on a judging panel? Would there be conflicts? How would we all deal with uneven perspectives and our own expectations? Would there be any hissy fits and who would be the first to throw down the tiara and head home? I just hoped it wouldn’t be me.

Over two days (including a weekend) in February we all met to review and assess the short list containing around 200 pieces of content. Iain McDonald was the gracious and proactive jury chairman encouraged us all to focus on the work submitted and to fearlessly champion what we loved.

Over the course of two intense days, I came to greatly admire my fellow judges: Iain McDonald from Amnesia Razorfish, Andy DiLallo from Leo Burnett, Dave Whittle from M&C Saatchi, Tiphereth Gloria from GPY&R, Chris Gillespie from  Future Buro, Bob Mackintosh from The Jamboree, Paul Bruty from the Glue Society and Ashley Ringrose from Soap.

Everyone was able to recall the campaigns, what happened when, and what their initial reactions were. It was very clear that everyone lived and breathed this work – but perhaps, most importantly, they all took their responsibilities personally – standing up for the great work that they saw and arguing the case as appropriate.

Each of the pieces that were to be included in the AWARDS book for 2011 deserved to be there. And those that received silver or bronze awards went that step beyond. The great work stood out – and that made our job easier.

2. Be an advocate for great work

While the judges pretty-much agreed on the works which would be included in the AWARDS book, the panel is small. With nine judges in all, one vote can swing the outcome. And when one of the judges would abstain from voting on work that they were connected to, it became even more intense.

When we reviewed and re-reviewed each category and discussed the merits of the work and awarding of the “gongs”, we could often be swayed by the arguments of the other judges. Those judges who were passionate about a particular entry would put forward their views. They’d advocate their position and explain their thinking. Sometimes that meant a piece would be voted up, and sometimes it meant that a piece was voted down.

But the process was fascinating. The insights of the judges were brilliant. And sometimes that advocacy changed the way we looked at everything else.

3. Be critical but not mean

One of the mantras we followed was to “be critical but not mean”. I liked the intelligence behind this. And, particularly for an industry which lives and dies by its “creativity”, focusing on critique, analysis and advocacy meant that the works being judged were given a fair hearing.

After spending many, many hours reviewing entries, reading submissions and watching videos, I have a new respect for those who judge awards. A lot of time, energy, focus and even creativity goes into the process. In a way, I would have loved to make this more open – where those who were involved in the creating the work were able to receive the feedback from the panel. Of course, that would bring a new level of intensity to the judging process, but quality feedback is an essential ingredient for creative growth. Getting this sort of unbiased and unvarnished feedback would be immensely valuable (even if it was confronting).

But what about you? Do these lessons resonate with you? Did you see the digital AWARDS finalists? What did you love?

I can see easily how to apply these three lessons in my everyday work:

The other week I chaored the Marcus Evans: Social Media – The Way Forward conference in Sydney. The speakers were great and the audience were clearly focused on the business-end of social media. It made for a very different style of conference.

You can see the tweetstream from the conference at What The Hashtag – just create a transcript for the dates 27/02-01/03.

And while many of the conference presentations focused on Facebook or Twitter, many people asked about other social media platforms – what’s out there and what can they be used for. It’s a constantly shifting field, but I still find the Conversation Prism by Brian Solis and Jess3 to be the most compelling and easy-to-understand explanation. It’s still one of the most comprehensive ways of understanding the vast field of “social” media. 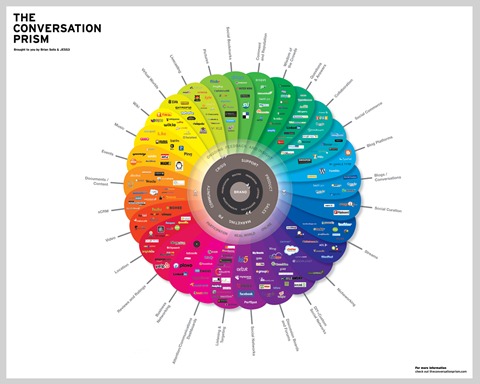 Sometimes I have a hard time finding five posts that really ring my bell. At other times, there is an abundance of great thinking. This week is an example of the latter.

Over the last week I have read some great articles, shared many of them with my Twitter followers and made notes for future blog posts. And while I still love Twitter for the immediacy, when I need detail or when I crave analysis, I turn to blogs. And I think many people are the same.

I read a lot of business books. Not as many as my friend, Drew McLellan (who seems to be a reading machine), but quite a lot.  I read them because they give me thinking time away from the computer – and because they force me to think in a sustained way, about a topic for an extended period. In this way, books remain – for me at least – an important way of continuously learning.

I once heard that the average American reads a book a year. Amazingly, Australia seems to care so little about books we don’t do studies of this kind (so I have no comparable figures)! I try to read a book a month (sometimes more). In five years time, that other person will have read five books. I’ll have read 60. That makes a huge difference.

Despite the books that I read, and despite the fact that they are written by brilliant people, most business books fail to capture me. I’m always looking for that little something extra in the writing. I’m looking for a little enchantment. The enterpreneur’s entrepreneur, Guy Kawasaki, understands this – and in his new book, The Art of Enchantment: How to Woo, Influence and Persuade, he had me from the first line -  a quote from economist John Maynard Keynes:

The difficulty lies, not in the new ideas, but in escaping from the old ones, which ramify, for those brought up as most of us have been, into every corner of our minds.

This is a business book that not only instructs – it does what it says on the label – it enchants. The book constantly challenges us by taking a turn when the road ahead seems straight. I often think of this as a way to “surprise and delight” people – but enchantment goes deeper. Where '”surprise and delight” hovers on the surface – as the effect – enchantment is that fundamental transformation that takes place in a person. It changes our hearts first and then our minds.

But how does this happen?

Guy takes observations of the business landscape, overlays them with analysis and then provides a step-by-step explanation of how enchantment can be used in each of these business scenarios. He explains how to enchant your employees, your boss – or anyone you come in contact with. The book shows the steps you can take to look deeply and act deeply – to create change and make it last. After all, you can’t make someone do something – they have to want to do it. The key to this, of course, is Enchantment. Use it wisely.

For some time I have been mulling over an idea. I’m grappling with the complexity of the world in which we live and with the changes I can see taking place before my eyes. I’m working through what it means to work, to live and to make a difference to our families, our friends and our colleagues. And I am doing this in a practical way – in my work for SAP North America’s Premier Customer Network and also as a member of the board of youth not for profit, Vibewire.

I have been drawn to sites like Kickstarter.com and Kiva.org that transform the relationship between individuals and organisations (and amongst us as well) – and I like what they are doing and where they are going. All these things are starting to weave together in my mind, loosely, under what I am calling The Social Way. But is there an example?

No doubt you will have heard about micropayments – small transactions that, when pooled together add up to a whole lot. We see them everyday in our ATM withdrawals (press YES to allow us to charge you $2 for this transaction). But rather than having a micropayment roll into your general revenues, what if you could use that to do some good? How big could it go? What broader impact could make with micropayments?

In this TEDx talk, Chris Noble from travel insurance company, WorldNomads.com, talks about their Footprints program, and how in the wake of the Asian tsunami in 2004, that WorldNomads put the idea of micropayments to the test. By simply asking customers whether they would add a donation to their insurance premium, WorldNomads transformed and galvanised their customer base into something greater – into a community with a shared purpose. And that purpose was not just to have a good time – but to DO some good.

Listen to the story in Chris’ own words. It sounds very much like The Social Way … or at least one of the paths we can follow.

There are some stunning statistics in this brief report from Graham Brown and Josh Dhaliwal. But it’s not the statistics that really concern me. It’s the impacts.

2011 is a line in the demographic sand. It’s the year that the Baby Boomers begin to retire. And as this happens, we’ll see massive shifts in the levels of expenditure and consumption. We’ll see the loss of vast amounts of corporate knowledge from our businesses. And our work, private and professional lives will never be the same again. I for one think this is great. It smells like opportunity.

A couple of times each year, about 4000 marketers at Fortune 1000 and Forbes Top 200 companies are surveyed about the future. This is the sixth in the series from CMOsurvey.org.

What’s encouraging to see is improvements in key business areas, including:

The report is very broad – which is great – but it means you will need to spend some time reading through and applying the data to your business. Think through your own strategic planning for 2011. Where are the correlations? Where are the differences? Why do they occur? Check, for example, slide 14 which investigates the top three reasons for growth strategy and see how closely they correspond to your own. Is there something you are missing? Is there something you can add to the execution of your marketing program this year? Can social media amplify this?

Most importantly, think about how your markets – your customers, partners, suppliers and other stakeholders – are moving. What are their futures. Use this information to make sure that those futures all intersect!

Here is a nice video that captures the statistics that underpin the growth of Facebook. It's a perfect introduction for your boss. Or your mum.