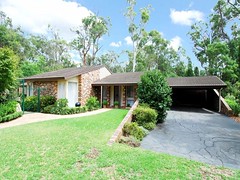 View from the front
Originally uploaded by servantofchaos

Actually, I think this is a view OF the porch. That’s right … this is the new place right before the chaos hit. It is unlikely that it will ever look as neat and as tidy again.

Well, it has been a little longer than eight days … and looks like it may be a few more until the blog gets back to normal. You see, moving house and moving phone lines got a whole lot more complicated on the day. With the truck packed and the old place cleaned out, we rang the real estate agent to let them know we would be around to pick up the keys. "Oh no, you can’t have the keys … the house didn’t settle today". Was that a fire alarm or just bells going off in my head?

A couple more hours, some rain, frantic phone calls all over the country and yet more cleaning … and we were finally given the go ahead to move in under license.

Now after a couple of weeks of unpacking, we are almost box free.

Unfortunately we also moved into a new telephone exchange area which has meant quite a bit of Internet-related drama. First up I was informed by my ISP that there was NO ADSL available on my new line. After a short rant, I found out that the line could be upgraded but would take 6-8 weeks.

Totally unimpressed I rang Telstra, Australia’s leading telecommunications company and owner of the vast majority of the fixed lines in the country. By now I was not mucking around — I wanted cable. There was no cable anywhere near my house, there was no ADSL capable lines, no plans for upgrading … and no wireless options that would not require a second mortgage. Things weren’t looking good. (On the plus side, the broadband consultant that I spoke to was excellent.)

I rang my ISP back and requested the phone line upgrade. Six to eight weeks it is … in the meantime I am living a dial-up existence. It is slow going, unreliable and ties up the only phone line in the house. There is more to this story and I will share it with you over the next couple of days (it will take that long to upload).

In the meantime, my BrandingWire buddies launched into the latest topic — car dealers. From a quick (but slow) scan of the blogosphere it seems that this topic has hit a nerve. My own post was interrupted with moving dramas (even though I thought I was well prepared — I was obviously mistaken), but it will be up in the next couple of days.

For now, I am taking in the view from the porch and catching up on some reading. The offline kind. And checking out Phil Gerbyshack’s favourite books on Shelfari. Now, if only they would allow Lulu.com books to be added I would put up the Age of Conversation.

8 thoughts on “View from the Porch”