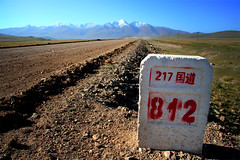 There have been plenty of milestones over the last couple of weeks. Mack and his Viral Garden turned one as did the astounding MarketingProfs, the mysterious Mindblob returned from his southern hemisphere sojourn and Lewis began injecting more … well, more Lewis, into his blog.

CK hosted a gang of bloggers in NYC, and many of us fell head over heels for Twitter. David Armano unexpectedly morphed into a marsupial, Paul copped some heat on a YouTube post, Tim travelled, returned and travelled again to Taiwan and Cam continued to pump out quality, thought provoking posts that kept us all on the edge of our keyboards. And speaking of anticipation, Sacrum whets our appetite with a sneak peak of an upcoming eBook (see the preview and watch the YouTube video).

There was also the dreadful Kathry Sierra incident, its aftermath, and the excuses, explanations and refusals.

On a more personal blogging note, I unexpectedly reached two milestones today. Just after e-mailing Valeria Maltoni explaining that my goal had not been reached, I found that it had — 500 inbound blog links over the last 180 days. (Thanks to all who link and inspire me.) Also … the 1000th comment — and a big thanks to Drew McLellan for that!

And while much has happened, already we can see the road stretching out in front of us. While I don’t know where it will take us, I know that there is no better group of people that I would like to journey with.

14 thoughts on “The Road Ahead”