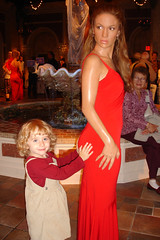 nola and jlo (sorry, that’s jennifer lopez to you)
Originally uploaded by wireful.

Some time ago, my brother, Dean and I were talking about business opportunities. You see, he was in the process of moving back to Sydney from Melbourne and was thinking about going into business for himself. He is a great hairdresser but had lost most of his clientele in the years he had lived in Melbourne so he was thinking that it was going to be difficult to get back into the industry in Sydney. I suggested that he start his own business — but one with a twist — a hairdressing service that cuts your hair in your office.

Of course, I have been pushing him into the world of blogging. And lo and behold, we just had our first blogger-in-common moment. I was suggesting that he try to hook up with some Australian bloggers who specialise in the Australian fashion and style scene … and sure enough he met up with Sara the Bargain Queen who I had met at the bloggers hookup after Ad:Tech. Just goes to show that it is a small world after all!

Oh, and in case you were wondering, I was following a little hypertext love tonight and ended up at Kevin Dugan’s excellent blog. As I scrolled through his past posts I found this great photo and had to share.

3 thoughts on “It’s a Small World”