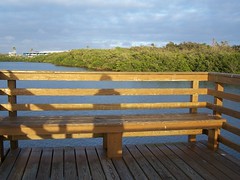 Self Portrait on the Pier 1
Originally uploaded by jea9.

I have to admit that I am a much better interpreter than ideator. I may be able to, on occasion, come up with something clever, but I don’t always have ideas on-tap. What I CAN do, however, is interpret … or re-interpret.

When I was at university I loved directing plays. I was fascinated by the sinewy language that playwrights would use to convey meaning, emotion and space on a stage. I thrilled at the way some writers could make words leap off the page and race around my mind. But most importantly, I found a sort of addiction in interpreting texts for performance.

As I would read, my mind would begin to race. I would find real world connections, links to events or situations, or cross-references to other texts. And the more obscure the text, the more interesting I found it. Then, in searching for ways to explain these problem texts to an audience, I would seek out new contexts that would turn the text into words that an actor could roll around their tongue and bring to life.

I was Hamlet. I stood on the shore and talked to the surf. BLAH BLAH.
— Heiner Muller, The Hamletmachine.

And when I started researching a sensational perfomance piece by Heiner Muller, I found that images and texts could collide. That there was something spectacular in a text that could do this … and that an audience could be held in thrall as it happened.

When I was re-reading Russell Davies’ post on interestingness (repaying my blog debt), I stopped on the first point. Take at least one picture everyday. Post it to Flickr. I DO love photography … but I find that I am much more interested in finding other people’s photos and re-interpreting them. For example, writing this post, I was looking for a self-portrait … and the shot above reminded me of the name of this blog and what it is like to write under a pseudonym — servantofchaos. You feel a little bit invisible — but there in the shadows.

But the best part about Flickr is that there is soooo much material ready for interpretation. And in a Web 2.0 world, where context is king, content still speaks baby … as long as you have the ears to listen.

Now only NINE more points of interestingness to work through … should be finished about March next year!