So what happens when you have a bad day?

The person behind Westpac’s twitter account it seems, accidentally tweeted that they were having a bad day (it has been deleted from their timeline now). Clearly, this can happen when a person is operating multiple twitter accounts – effectively dissolving the distance between an individual and the brand you represent. But will this just make a bad day worse? Are there any good things that can come out of this? 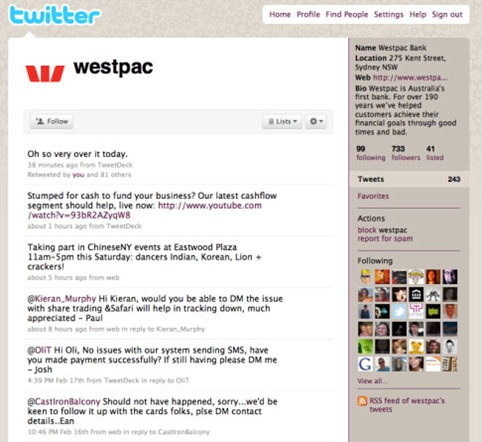 To be honest, it could well be the best thing that has happened to the Westpac social presence. It’s attracted a significant amount of attention on Twitter – and it is driving up their follower numbers. The interesting thing is that it has generated quite a deal of good-natured banter – real conversation – which is largely lacking in the social media activities of most brands. This is a GOOD thing.

You see, Twitter IS SOCIAL. It is a social space. The last thing that people want in their “social spaces” is the locked down, hollow-eyed automatons that REM so eloquently characterised in their anthem “Bad Day”. This is the first glimpse that we have seen behind the Westpac veil – and I applaud it.

Have you ever seen the televised St. Vitus subcommittee prize
Investigation dance? Those ants in pants glances.
Well, look behind the eyes.
It's a hallowed hollow anesthetized
"save my own ass, screw these guys"
smoke and mirror lock down.
Broadcast me a joyful noise unto the times, lord,
Count your blessings.
The Papers wouldn't lie!
I sigh, Not one more.
It's been a bad day.
Please don't take a picture.
It's been a bad day.
Please.

But of course, it always helps to have a social media policy and a risk management/crisis comms plan in place. Even if it just says "own up to your mistakes and move on".

Westpac confirms it was an honest mistake. Here's hoping we see more personality behind the brand! 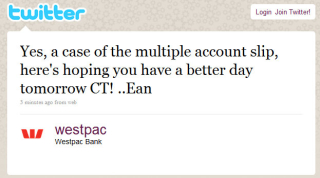