At year’s end we all begin to turn our attention to the future. We re-evaluate the trends that have ebbed and flowed, and we look over the horizon towards that as yet, undiscovered country.

Joe Pulizzi rounded up a number of folks to get their content marketing predictions for 2009 – and Scott Drummond pulled together a mammoth list of predictions over at MarketingMag. I won’t be making predictions this year – there is more than enough speculation out there. However, I will put forward a couple of facts that mat be useful for you to consider.

Back in November I felt that social media was mainstreaming … and it seemed an opportune time to encourage marketers (in the midst of planning for 2009) to CONTINUE to innovate despite (or perhaps “especially because of”) the changing economic conditions:

For marketers still finalising their budgets for 2009, I would recommend setting aside a small experimental budget for social media. Hive off 5% or 10% of your MEDIA budget and contact EXPERIENCED agencies and consultants (email me if you need recommendations).

But even back in November, I felt that social media could go one of two ways in 2009. Because fear is the enemy of creativity and innovation, there was the possibility that marketers would fall back on the “tried and true” – investing their marketing hopes in traditional advertising strategy and patterns of media spending. But I also felt that with the lower costs, the more precise targeting and killer metrics, that a stronger digital mix (with an emphasis on “social”) would prevail in 2009. But the overwhelming reason for my optimism lies in the fact that our AUDIENCES have already shifted – consumption and engagement patterns have been transformed – and if we want to now REACH an audience, we must participate with them on their own terms. 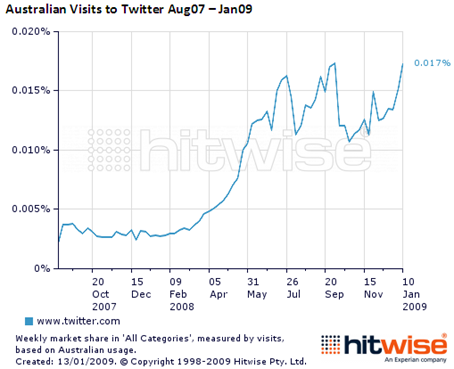 Interestingly, as Hitwise recently announced, Twitter (the most social of social tools) is experiencing phenomenal growth in Australia -  517% year-on-year. And it is not just for “personal use”. Traffic patterns for December 2008 and January 2009 indicate that Twitter is being used in the workplace (Lucio Ribeiro has even put together a list of 20 Australians you should be following on Twitter). And when I hear the Asia Pacific President of SAP (where I work), Geraldine McBride, mention Twitter in a kick-off keynote address, it seems clear that not just “change” but “transformation” is under way.

As Renai Lemay noted (in an article I found via Twitter), both Prime Minister Kevin Rudd and Opposition Leader, Malcolm Turnbull have joined the service. And while some of the leading Australian Twitter folk interviewed suggest “it's the fundamental architecture of the service that is driving growth” – I would suggest another case. We are all herd animals. We simply go where our friends go. And as a marketer or planner, that is compelling enough for me. What about you?