Sometimes I wonder if Wade Millican secretly wears a cape. Not only is he incredibly smart, he also acts as the social conscience of Twitter, regularly pointing out the imbalances in our world. Or perhaps it’s just mine (thanks, Wade). So this week’s Friday Folly is devoted to Henderson & Horning who are being personally introduced to social media by Wade.

A few weeks ago, Wade pointed out the billboard shown here. He wasn’t happy about the depiction and content. He didn’t like walking past it each day on his way to work — so he decided to do something about it. He rang Henderson & Horning to complain. Not gaining satisfaction, he contacted the advertising standards board and lodged an official complaint … which is now being processed.

Yesterday, Wade provided an update, noticing that a Google search for Henderson and Horning brings up his entry "Sexist Advertising" just below the business’ entry. The memory of the long tail is, indeed, forever.

Update: Seth Godin asks us to consider our complicity in bad marketing. Think about the choices we make when we make a purchase decision.

"The IT Crowd" is one of the funniest shows on TV — especially if you work in (or near) IT.

Normally the Friday Folly looks at questionable decisions made in the name of branding. This week, however, the Friday Folly relates more to the man in this video. Or perhaps it is a Saturday morning folly? You be the judge.

Not quite the "Dance of Shame" from Pylea, but c’mon. We’ve all been there. Hold your head up high. With thanks to Paul Isakson.

Just when I was wondering what to write up for today’s Friday Folly, I was rescued by a tweet from Tim Brunelle pointing out this fantastic site. It is a MUST SEE for anyone working in marketing/advertising. There are some fantastic pointers for us all:

We skip the strategic deliverables. We pas on the matrixes, the payoffs and the metrics. We ignore any viral functionality. We focus on the ultimate end-user …

And, ok, it may not exactly be a Friday Folly … but it may make you smile at the end of a busy week.

Can you spot the target audience for this one? Via Ghetto Supreme.

This brilliant piece courtesy of Lauren. Actually I don’t know if this is folly, lunacy or brilliance. It is even better that the link does not work.

The Banner Blog folks (via Katie Chatfield) bring today’s folly — but not from the brand messaging point of view. This is the response TO a piece of direct mail. How would you handle this one, dear reader?

Any guesses which agency lives in this building? OK … only joking. I think it’s a restaurant. Seriously. 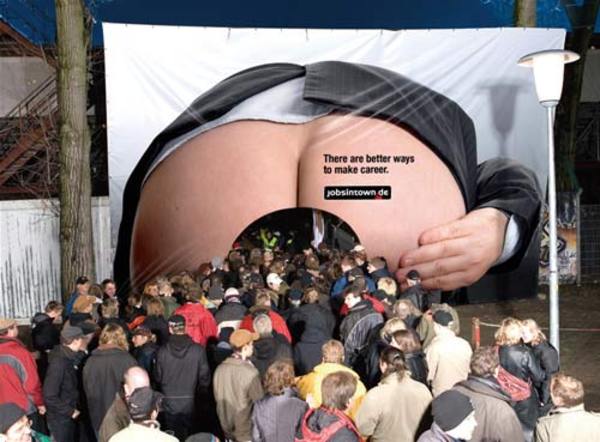 Yeah, I know it has been done to death, but seriously, who approved this one?