I knew it was the end when Brett, my mechanic knocked at the door. He explained that I had had six good years with my Alfa 156, but that was ending. Was about to end. And that from here on in, I was to experience a world of frustration, anxiety and financial burden. It was time for the beast to go. 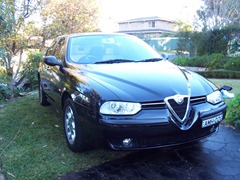 To my surprise, I sold the car within days. Carsales.com.au had done its job and a young man came along to check the car out with his father.

Wow, I thought to myself, “some first car”! And despite being upfront about the high and ongoing maintenance costs and so on, a decision was made, prices agreed and keys exchanged.

But this left me in a difficult situation. No car. And thanks to repeated backflips by the NSW Labor Government on extensions to the rail network, little to no public transport. I needed a car, and I needed it fast.

I had not seriously investigated the car options – thinking that I had weeks of selling time ahead. But a quick look around convinced me of one thing – there were few interesting options available. Having had a Volkswagen Golf previously (and loving it), I arrived at Denlo in Parramatta and checked out the Golf and also the Polo. There was a sale on (great)! For the money (and the go), the GTi seemed like a one-for-one replacement for the Alfa, but was lacking in the heart pounding emotion. So I opted for the baseline model. Nice. Reliable. It would do me for a couple of years.

Having made that decision I thought it would be easy. But then the buying process was convoluted. The sales guy stepped me through options, variations and prices. It took hours. And in the end, I was ready to walk away – we could not agree what I considered to be a fair price. My sales guy would rush off to check with his sales manager, returning with little to no change. I was starting to feel ripped off. But realising that I would have to go through this process again with another dealer somewhere else, I finally agreed to an unflattering deal.

But by now I was so dissatisfied I was determined not to spend any more time or money with these people.

This was two years ago.

More recently I needed to upgrade my old station wagon. Again, Brett had knocked at my door and delivered the bad news. This time, however, Denlo and Volkswagen were at the bottom of my list. I visited dozens of dealerships. I looked, I test drove and I researched. And eventually I came back around to Volkswagen. The Passat models looked good – but were apparently as rare as hen’s teeth. I even made some preliminary inquiries via Twitter, chatting with car enthusiasts. A couple of dealers with stock contacted me and offered test drives and good deals.

I realised that I was making arrangements to test drive cars miles away from where I lived. My Volkswagen buying experience with Denlo had left such a sour taste in my mouth that I was willing to travel miles out of my way to spend thousands of dollars with someone else! I was really pushing this principle.

But the following weekend I happened to be in Parramatta. We reluctantly wandered in to Denlo and the “sale” flags were flying. There were people everywhere. Maybe this wasn’t such a great idea. I had already had a bad sale experience here before.

Our sales guy, Russell, seemed down to earth and knew the Passat well. As we chatted he organised a trade in valuation of our old car parked out on the street. He offered coffee – but he was also keen to press on. It was sale time and there were deals to be made. This suited me fine – I was more than ready to walk away at a moment’s notice.

We talked through the options. Russell checked on what we needed and listened to what we wanted. He didn’t appear to be interested in wasting our time and explained which options and colours were available and when we could get them. And then he gave us a trade in figure.

We had already had an acceptable trade in figure in mind. We thought that was a fair price. Something that a dealer could achieve without risking commission.

It was way too low.

Before I had a chance to even think that I had wasted more time here, he flicked his eyes across his computer screen and countered. A much better deal. Really, we couldn’t say no. And we didn’t.

From there, again, we were whisked through other parts of the building. Yes, we would need window tinting (oops totally forgot). No, we already have great finance thanks to CUA (really, check them out – astounding). At each handover, I would be expecting another hard sell – but unlike last time, the focus seemed to be on what I needed rather than on what they could sell me.

It still took hours to complete the sale, but second time around, this buying experience was completely different.

Oh, and when I came back a week later to pick up the car, all the staff on the floor stood up and applauded. I couldn’t help it, but I felt like I’d just won a car on a quiz show – even though I knew that I’d be paying this baby off for years. And for icing on the cake, they even emailed me a photo of me with my new car.

So would I buy another Volkswagen? Yep. Would I buy it from the Denlo folks? Yep. Should you? Check them out. Ask for Russell. But just remember that the buying process takes some time. It can wear you out and wear you down.

The only thing that did annoy me was the “media device” and the iPod dock. Buying the media device meant we could play songs off a USB drive or via an iPod or iPhone. But the device (one of the few optional extras we chose) doesn’t come with an iPod cable. Something I didn’t know until after delivery – and months later I still have not gotten around to getting one. It’s on my list for this week.

2 thoughts on “How Denlo Changed My Volkswagen Experience”