When I first came to look at the house where I now live, I was struck by the towering trees and the piercing blue sky that framed it. It seemed amazingly “Australian”. 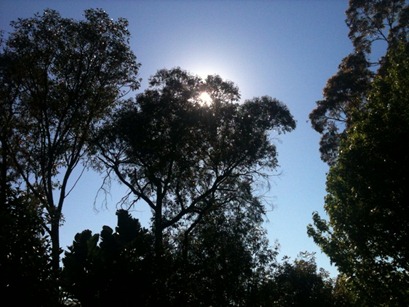 To my great surprise there was a large undeveloped block of land behind the house – quite a rare sight in this neighbourhood! Over the last 100 years or so, this land had been variously an orchard, grazing land for dairy cows and bushland native animals. Prior to that it was part of the the government farm that encompassed this whole area, setup in 1802 to help feed a starving colony. The traditional owners, the local Dharug people – and their famous warrior chief, Pemulwuy have lived here for millennia. 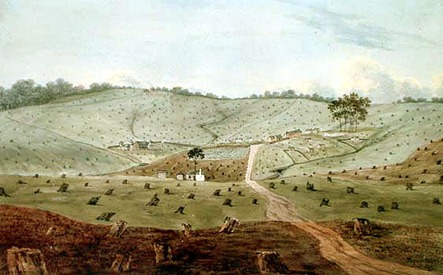 Since the early 20th Century by a family of German migrants, the Pragers, who had strenuously resisted any efforts at subdivision. But after their death, the land was sold and development planned.

While this was going on in the background, I was enjoying the occasional stroll through this “local forest”. The Pragers had introduced a range of plants but there was still a thriving crop of native bushland that seemed to be home to all manner of native species. Certainly the male Gang-Gang Cockatoos loved the 200 ft trees to showcase their genetic prowess – screeching across the valley in search of a mate.

But what I didn’t realise until reading the species impact statement accompanying the development application was that this site was home the critically endangered Sydney Turpentine-Ironbark Forest. In the last 200 years we have decimated this once plentiful tree species – with less than 5% remaining in remnants only.

The land also contains another “endangered ecological community” – the Shale Sandstone Transition Forest – and serves as the home, feeding and roosting grounds for up to six threatened species. Just on the surface, it appeared that this small pocket of remnant forest deserved protection.

A group of local residents got together to discuss a response. We wanted to preserve as much of this bushland as possible. We wanted to allow future generations to be able to imagine what the local landscape once looked like. And we wanted them to be able to experience it first hand – close by.

But for many of us, engaging with development applications – with the processes of review and approval at the Council and Government levels is beyond our experiences. So in many ways, residents groups face an uphill battle articulating – in the right form and at the right time – their objection or opposition to plans.

But we wanted to try. In fact, we gathered over 70 signatures at two public meetings. We’re learning a lot as we go – and are documenting as we go. If you are part of a local residents group, then I hope you can learn from  what we are experiencing.

You can follow our experiences at our blog – Save the Hills Bushland – and you can join our Facebook Page too (the more the merrier!)