When I speak at conferences or try to explain “social media” to people, I fall back on what I call “simple social media”. But it wasn’t until recently that I realised that I have never written anything about it. Well not exclusively, anyway.

For me, social media is made up of four elements:

These four elements were first articulated for me in Michael Wesch’s video An Anthropological Introduction to YouTube. But rather than placing each of these elements on an even footing, I see CONTEXT as sitting below the others, operating as a foundation as well as a conduit. 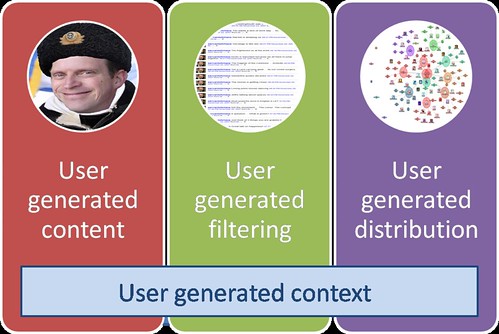 The thing to remember is that brands can be considered “users” here – they can provide value to the online community through the generation and creation of content, they can filter useful and relevant content for us, and they can also help it spread. BUT the real value lies in them creating the CONTEXT in which this value is maximised. If a brand can do only one thing for me online – then CREATING this context is what I want. But venturing into the other sectors not just doubles – it squares the value (ie the network effect kicks in immediately).

Social media has the capacity to EXPONENTIALLY grow the sense of value that you provide to your community by actively working with each of these social media elements. (With thanks to Derek Markham for the E word!) But which one and when? Well, that’s where strategy and strategic planning come in.