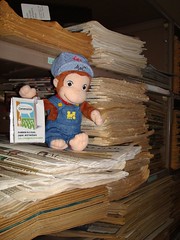 Having worked on two, and heading into the third Age of Conversation book (bringing together hundreds of thought leaders in a single, crowdsourced book), not to mention our recent efforts around The Perfect Gift for a Man (30 crowdsourced stories reinventing manhood), I feel like I have a fairly good grasp on crowdsourcing and its potential.

Unilever are putting this to the test. Via Idea Bounty, the Peperami brand are tapping the wisdom (and creativity) of the crowd to ideate their next integrated marketing campaign. Those creating the winning idea will receive a $10,000 payment and see their concept be turned into a global campaign.

But this is not a one-off – The Guardian reports, “Unilever said it has no plans to retain a full-time ad agency for the Peperami account in future.” So clearly, we are seeing the beginning of a shift – the Brand (Peperami) are moving ideation away from the agency world and reaching out directly to their customers. In response, over 1000 submissions were received.

Amelia Torode airs her concerns around crowdsourcing advertising – and the energy with which it has been taken up – raising some interesting points in the process. For example:

The comments to the post make for great reading. The debate moves from the role of creatives and interns (and whether they are ripped off by the agency business) to the process followed by Idea Bounty.

But the question that concerns me is – “is this sustainable?” Crowdsourcing is hard work. Not all ideas have legs – or can be extended across different channels and cultures. There is a real overhead – which I presume will be taken up by Idea Bounty – and it may simply be that we shift the budget from the ideation stage to the curation of those ideas. And if that is the case, have we really achieved anything? Will the ideas be better? Will the sales increase? Will the brand be more loved by its consumers?

There are many more questions … but I will leave you with this – if your customers really do become the creator of your brand, and if they are successful, do you share the spoils of the success with your community? You see, for me, crowdsourcing is not one way – and while a one-off “prize” may satisfy at first, it could easily leave a bad taste in the mouth long after the first bite. And is ANY brand ready for the kind of backlash this could generate? Are you?

3 thoughts on “Can Curating the Crowd Work?”