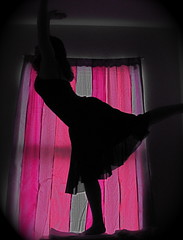 The most pervasive aspect of living in an online, socially connected world is not identity –- but the traces of our identity that we leave with every click of the mouse. For every time we visit a website, download a PDF, leave a comment, buy a song or write a blog post, we leave something of ourselves behind.

In the 1960s, Jacques Derrida described a trace as the “mark of the absence of a presence” – which is precisely what happens to our digital “selves”. We are socially connected, operate in a sense-and-respond mode, exercise social judgement and all the while, leave our presence in places where “we” no longer exist. For all intents and purposes, the social web is Deconstruction made manifest.

I touched on this idea in The Evanescence of Social Media, but it also permeates much of my thinking here around social media, branding and identity. For whether we realise it or not, we increasingly live our lives in public –- over-exposed, unwittingly open, unknowingly tagged, tracked and accounted for -– our fragmented digital identities playing out a larger, uncontrolled version of our selves in a digital Pythagorean twist. You see, in the same way that social media demonstrates that businesses no longer have control over their BRANDS – it also shows that WE no longer have control over our own representations.

Take for instance, the recent examples where people have lost their jobs, been disciplined or otherwise penalised for their actions on social networking sites. As Drew McLellan points out in Who Really Owns Your Social Media Persona?:

The problem is not so much that WE inhabit these online networks, but that our traces can be interpreted out of context -– taking on newer realities, being reconstituted and recombined in ways that we did not anticipate. But this also has benefits, even if the risks may be random and powerful. For one thing, it allows for ambient intimacy (a term coined by Leisa Reichelt) – where the reader of a blog post, a Twitter message, Facebook update (or viewer of a Flickr photo or YouTube video) etc interprets this communication as a real-time, in the moment emotional connection. This fosters a sense of knowing and understanding in the reader -– creating the bonds of relationship:

Ambient intimacy is about being able to keep in touch with people with a level of regularity and intimacy that you wouldn’t usually have access to, because time and space conspire to make it impossible. Flickr lets me see what friends are eating for lunch, how they’ve redecorated their bedroom, their latest haircut. Twitter tells me when they’re hungry, what technology is currently frustrating them, who they’re having drinks with tonight.

And while this can be seen as “too much information”, for others it can provide a real window into the lives of those that we care about. The big difference of course, is that this ambient relationship is completely opt-in –- it is information that is pulled, not pushed. If we choose to, we can “unsubscribe” from our friends’ updates with the click of a mouse.

So, does this mean that online friends aren’t really friends? This has been (at least) partly blurred by Facebook’s appropriation of the term Friend as a form of membership status – but in an effort to bring some consistency of thinking around this, Mike Arauz has developed the spectrum of online friendship. This spectrum feels quite linear but it does capture the essence of the progressive nature of online interactions and relationships. 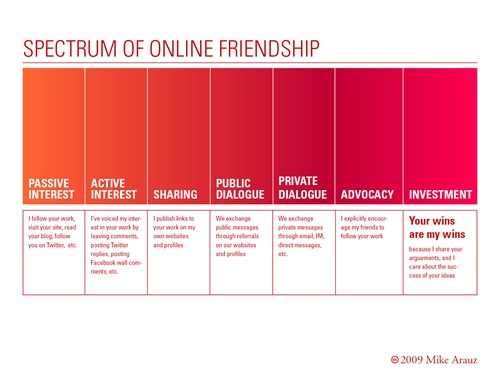 However, the traces of our identities left behind by various cultural productions (whether writing, image or video based) add a level of complexity. What this means is that you may find someone moving from passive interest to active interest by reading and interacting with content that you produced two or three years ago. “You” may no longer BE the same person that you were in 2006 -– and yet, the immediacy of your cultural artefacts continue to tell the story of “your self” as though it was hermetically sealed and protected from the ravages of time.

The consequence of this could well be the impetus to constantly pro-create ourselves in the instant by updating our status, sharing our thoughts and ideas and advocating for our communities. So paradoxically, tools such as Twitter which were developed as a way of handling the speed of life, contribute to the sense of acceleration. It may well be that we are barrelling head-long into a future where the very nature (and rules) of friendship requires revision. We may well end up in a world that looks

It may well be that this life of delays, rewrites and echoes is closer to the dystopia shown in Josh Harris’ movie, We Live in Public. As Faris Yakob points out, while disconcerting, this vision of the future has become reality – at least for some parts of ourselves.

UPDATE: In an almost textbook illustration, John Johnston points out this post by Nicholas Carr from March 2007. I would have commented on it, but his blog no longer takes comments.

6 thoughts on “Our Lives in Public”