As the line between our personal and professional lives continues to blur, we are increasingly seeing both brands and individuals struggle with responsibility, ownership and commitment. This is being exacerbated by the accelerated uptake of social networking tools such as Facebook, LinkedIn and Twitter – where our personal and professional lives sometimes meet in unexpected ways. 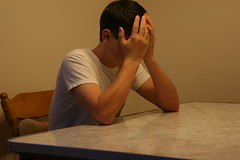 In an attempt to help delineate the personal/professional or public/private debate, many have adopted the idea of personal branding. Dan Schawbel has built an enviable profile and is recognised as a leading proponent in the personal branding space, but others such as Beth Harte simply don’t believe in personal brands. As Geoff Livingston points out, there is a real difference between a personal brand and an individual’s reputation:

Reputation is built upon past experiences — good or bad, a real track record. Personal branding is often an ego-based image based on communications. A personal brand can demonstrate a person is there, but it’s often shallow and can be contrived. It’s just like a sport stripe on a car, nice but no engine, no guts, no substance. 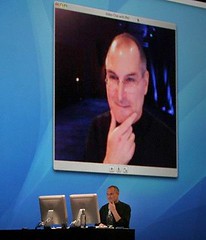 When Dan Lyons began writing as Fake Steve Jobs, the online world was intrigued. But the thing that impressed me was the capacity for FSJ to inventively take on the Steve Jobs persona, accentuate some of his characteristics and entertain a growing number of readers. I particularly loved his ability to incorporate news and current events into the commentary, such as this post – Enough is enough! I just fired that idiot Jerry Yang:

But you know what really put me over the top? It was this ridiculous letter to shareholders that Yahoo put out yesterday. Thirteen hundred words long and it felt like thirteen thousand words and in the end what did it say? Blah blah blah friggin blah. Me good, Icahn bad. Jesus, Jerry. That's what you were doing when you were supposed to be blogging? You were writing some lame-ass alibi trying to make up some excuses for your lousy performance? I'm sorry, but you're done. You suck. You're toast. Maybe the Yahoo board can't manage to assemble a pair of balls big enough to fire you, but you know what? I was born with balls that big. In fact I actually like firing people. I get off on it. It gives me wood. You get it? I'm rock hard right now. I'm lifting my desk off the floor. You're done, Jerry.

But did this do any harm to Apple? Did it harm Steve Jobs? The very fact that someone with talent invested the time and creative effort to bring FSJ so vividly to life says much about the passions that are aroused around Apple. And I would argue that the parallel world that was created added dynamism and energy to our perceptions of both Apple and Steve Jobs. In the end, Dan Lyons drew a line in the sand, stepped across it and became Real Dan Lyons.

But what happens when a fake personal brand is a little closer to home? 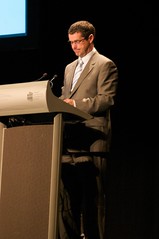 Over the past few months, many of the Australians who use Twitter have been treated to the hilarious and sometimes provocative conversations of (fake)Stephen Conroy. As Minister for Broadband, Communications and the Digital Economy in the Australian Government, the real Stephen Conroy drew the ire of many participants in the online and related industries over the proposal for an internet filter/censorship regime, and FSC proved to be a wonderfully satirical take on the events and discussion as they unfolded around this controversial topic.

The characterisation of FSC veered from scheming politician to Internet Geek. Sometimes FSC would mock the participants in the “Twitter echo chamber”, while at other times he would turn his attention to politicians. He even gave an interview to the press earlier this year where, when asked, what activities he pursues after hours, he replied:

I used to be an avid kitten fisherman (purely recreational; catch-and-release), but there just aren't enough hours in the day anymore to find kittens, let alone stuff them into a sack and toss them into a river.

However, as with Fake Steve Jobs, a line has been drawn in the sand for FSC. Over the last few weeks, pressure has been mounting on the person/s behind the caricature to reveal themselves. And today, Telstra employee, Leslie Nassar removed the FSC mask and announced to the world “OK, so here it is; Fake Stephen Conroy = Leslie Nassar”. And this is where it gets interesting.

Telstra is Australia’s largest company and as such is always involved in many large scale projects with the federal government. So the revelation that it was a Telstra employee who had been satirising the government minister responsible for broadband was bound to send Telstra’s PR and corporate communications team into overdrive. Thus far, however, there has been no press release – just this blog post from Mike Hickinbotham which starts:

First off, let's review the facts.

However, Bronwen Clune questions whether this response really is as open and transparent as claimed.

This is certainly a thorny issue for Telstra, and one which many brands will be watching carefully. Particular attention will be paid not just to what Telstra SAYS but what it DOES. As Seth Godin wrote recently on the subject of authenticity:

If it acts like a duck (all the time), it's a duck. Doesn't matter if the duck thinks it's a dog, it's still a duck as far as the rest of us are concerned.

Authenticity, for me, is doing what you promise, not "being who you are".

That's because 'being' is too amorphous and we are notoriously bad at judging that. Internal vision is always blurry. Doing, on the other hand, is an act that can be seen by all.

It strikes me that while many brands seek to reach out and engage their customers in an authentic way, there is still a lot of talking and not enough doing. By Mike Hickinbotham’s own admission, Leslie “understands the whimsical nature of social media and in particular Twitter”. Leslie has been able to build a following and keep a suspicious and cynical audience in hand.

From a branding point of view, this seems to be a great opportunity for Telstra to take advantage of a mini-crisis. I can imagine whole campaigns built around Fake Stephen Conroy or perhaps a more anonymous “Minister for the Internets”. I can see the hundreds if not thousands of tweets, blog posts and articles proclaiming Leslie as Australia’s own @Scobleizer and Telstra the undisputed leader in Australian social media strategy (I’m sure there is the possibility for some post-facto rationalisation by a planner somewhere).

Or, of course, Leslie may find himself out of a job.

A line in the sand has been drawn. Now it is just a question of which way Telstra will jump.

UPDATE: Stephen Collins turns the spotlight around and asks whether we all aren't partly responsible; and "SocioTeque" suggests that today, if any, is the day to join the conversation. Stilgherrian provides another angle over at New Matilda; and Mike Hickinbotham provides an update from the Telstra side of the scrum (apparently Leslie is NOT out of a job).

7 thoughts on “Drawing a Line in the Brand”