It seems that Twitter is the word on everyone’s lips at the moment. Perhaps, as it mainstreams, it will surf over the barriers that continue to hold sites like Facebook and LinkedIn back from true, widespread, public appeal.

One of the driving forces behind this is the ease with which celebrities can use and connect with their audiences. For while many celebrities use Facebook, they do so furtively and largely away from the prying eyes of the general public. The benefits of connection that we all find in managing our social graphs via Facebook is certainly well-known by celebrities – even if the occasional Paris Hilton privacy leak causes some ripples of concern.

Twitter, however, allows celebrities to simply and effectively extend their personal networks and reach much further – with little downside. They are, after all, already used to acting, behaving and interacting with people on a large scale. Twitter paradoxically, allows them more control than other kinds of media. 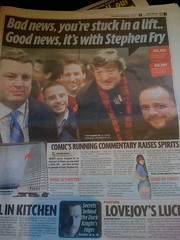 By using Twitter, celebrities can ACTUALLY communicate directly with their fans and friends – there are no agents, journalists or PR people involved. For once, a celebrity is able to communicate with their communities in an unmediated and unregulated manner. Stephen Fry is doing this successfully as is MC Hammer. Britney Spears has her own social media team, but also drops into the twitterstream from time to time. John Cleese provides excellent entertainment and diversion and Lance Armstrong is a must-follow for the cyclistas. The Guardian also shares a list of US politicians as well as porn stars who use Twitter.

This fascinates me. Many brands who begin to experiment with social media work from the concept of control outwards – gradually, through participation and experience, finding a comfortable method of managing conversations. Celebrities, however, start from the other end of the spectrum – un-managed conversations, direct discussions with fans and unmediated content.

Interestingly, I have a feeling that the adoption of Twitter by celebrities will actually drive the sort of widespread adoption that will break the mainstream barrier. I love that they “get it” immediately … after all, celebrities, like no other, understand the strange power of connecting with crowds.

But on that note … what is it REALLY like for a celebrity with thousands of followers? Recently, Ian Tait took the following video showing the twitterstream exploding with comment when Google’s Gmail service failed. It really is a torrent.


Gmail Fail on Twitterfall from Iain Tait on Vimeo.