The playground was a swarm. To my left there are legions of boys running to and fro; to my right whole classes seem to be moving steadily across the playground. In front of me, our shared destination – the canteen – sits alone like a giant weatherboard pimple rising up out of the summer asphalt.

Eventually I relent and go to see what is happening. By now the crowd is two or three deep and I struggle to see who is caught at the centre of the crowd. It is Grant Auchterlonie and he is in my class. After some time and after many of the other boys have left I finally get to see what the fuss is about. And there it is … on his arm. It is the first digital watch that I have ever seen – complete with stopwatch to 1/100th of a second.

I can remember it like it was yesterday. The excitement and buzz in the playground is palpable. But it is not just this story that has stuck with me. There were many other stories created that day. 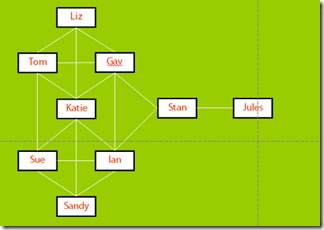 As I discussed yesterday, influence is not just about the number of people that you have in your social network. There is a much more complex dynamic in effect where your personal store of social capital is used and accrued based on your interactions with those in your network. For example, in this diagram, it is easy for Katie to reach a large number of people. She is at the centre of the network with 1st degree connections to most people. When she chooses to push out into this network, she uses up a unit of accrued social capital. But to reach beyond the 1st degree network to Stan, Katie must go “through” either Ian or Gav. That means that she must use up two units of social capital. Interestingly, Ian and Gav must also use up one unit of social capital in this process as well. So reaching to the 2nd degree network requires not TWO but THREE units of social capital. As you can see, with every ADDITIONAL degree that you move through your network, an exponential amount of social capital is consumed.

BUT one of the most fascinating aspects of this is that the process can also be easily reversed. That is, social capital is ACCRUED when this process is reversed, driven by the power of a personal story. How? This is the Auchterlonie effect in action.

When a remarkable event takes place we play multiple roles. We are observers – watching from a distance. We are participants interacting with the other players. We may be the subject of the event itself (such as the ‘birthday girl/boy’). But as the temporal moment of the event passes, we become STORYTELLERS – crystallising the events in a narrative that involves us, encompasses the range of other participants and provides emotional drive to bring others into the loop of this story. The Auchterlonie Effect is the impetus that drives the ongoing story of YOUR personal engagement with the initial event – and it is, essentially, being able to bask in the reflected credibility of another. 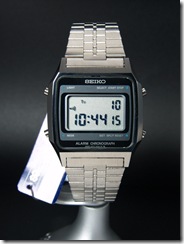 How does this work outside the playground?

Say, Katie gets a new iPhone. It is the first in the country. No one has seen one before. And when she comes to coffee morning on Friday, she brings her new treasure along. A crowd gathers. As the person sitting next to her, I am in close proximity to this new device and am able to try it out. I am interested. And while Sue casts her envious eye over the prize, I move to a table nearby where my friend, Stan, is sitting. I relate the story of the iPhone. I explain how my 1st degree friend has a highly desired iPhone and talk to him about the things that I discovered while using it a few minutes ago. I suggest that, if he is interested, that I could get him a closer look at the said, iPhone. Meanwhile, Stan’s young friend, Jules, arrives for his morning ritual of coffee and muesli and listens into my story. Picking up on the vibe and the opportunity, Jules asks to tag along. So together, the three of us return to get a closer glimpse of the iPhone.

Now, multiply this out across the rest of the network and you can see that the power of the story can easily build very quickly. This is what we would commonly call “viral” – as in the case of a “viral video”.

The power of the story

In The Future of Your Brand is Play, I discussed how you can begin to build “infatuations” into your marketing. It is these infatuations which create the conditions for the Auchterlonie Effect. But by understanding this effect, you can help facilitate social judgement – for at every point of connection across the network, each person must make a decision about whether to bring another person into the gravitational pull of the story. When Stan introduced Jules into the story above, he had evaluated the situation and realised that he could accrue a unit of social capital based on his proximity to the story.

The strength of weak ties

Before something DOES “go viral” it needs to spread beyond the echo chamber of 1st degree connections. Without this vital step, a story will just circulate upon itself until it collapses under the collective weight of retelling.

But, you see, social judgement is incredibly tenuous. Often it has only one strand
, as shown here. If the one link breaks, then the story will not spread into adjacent social networks. It is why, as Valdis Krebs suggests, influence needs many connected people to spread – not just the highly connected.

This is precisely why it is difficult to predict when a video or a meme will “go viral”. It can only succeed when the MARGINAL cost of trusting is LESS than the risk of losing a person’s trust – where social capital continues to accumulate towards the centre of the experience.

But understanding the Auchterlonie Effect and the way in which social capital accrues is essential in achieving your marketing outcomes in a social context. By allowing social judgement to be exercised around your brand’s story, you are producing social capital as a by-product. And this can only be a good thing for brands (if they get it right).

Oh, and in case you are wondering – unfortunately, Grant’s claim to fame was fleeting. But even though I later purchased my own digital watch, I still recall the day when his watch made me famous too.