A couple of months ago I was surprised to see a name appear on my Twitter timeline. It was Stephen Fry. He was, in fact, the first celebrity that I would be interested in following.

But as Twitter starts to mainstream and the user base grows, it becomes ever more difficult to manage those who you listen to and interact with – which of course, depends on your stage of Twitter Commitment. If you are starting out, you can learn much from Amber Naslund’s excellent guide. But imagine that you are MC Hammer who has about 125,000 followers and is following over 25,000 people in return. How do you cope with the torrent of digital information that streams past you at an astonishing rate? How do you interact, engage or dare I say it, converse? As Cath points out, Twitter is not a gateway drug – you only get out what you put in – and clearly, MC Hammer is deriving value from Twitter not only as a broadcast tool, but as a way of interacting with people. How does he do it and still see value?

I have a much smaller volume of data, links and followers to contend with – and yet it can appear, at first blush, overwhelming. With around 2700 followers, I also follow-back 2300 or so people – this generates thousands of messages each day. To cope with this, I have an iterative strategy – process->tool+process. This is how it works.

As I have mentioned to Iain McDonald previously, I have what Anne Zelenka calls a bursty process. I work very well with the flat knowledge networks afforded by twitter and other online tools at my disposal and have found a way of making discontinuous productivity work in my favour:

We used to talk about two steps forward and three steps back, and so on, but today it’s more like 50 steps sideways and 2000 steps forward. Networked, social-based opportunities are so explosive today than when we pursue them we’re flung forward at pace.

For sometime I have been using TweetDeck. It provides the functionality that Twitter itself does not yet provide. But I use TweetDeck in a particular way.

The far left column contains the messages from all 2300 people that I follow. It refreshes approximately every four minutes; so as you may imagine it flies by at quite a pace. 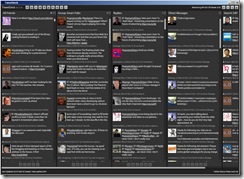 The second column is labelled “smart folks”. These are the people that I know and/or whose judgement I trust. These people help filter the twitterstream for me. This column refreshes more slowly.

The third column captures all instances of my twitter handle – servantofchaos. So I see when someone replies to me, or mentions me. It only refreshes every 10-12 minutes.

The fourth column is for direct messages and it refreshes every 15 minutes or so. And additional columns carry particular search terms that are important to my work. They change from time to time, but are an incredibly useful way of monitoring any mention of your product or service.

With my bursty work ethic, I take notice of direct messages as they arrive. This normally works out to be once an hour or so. I quickly also check replies and the smart folks for topics that may be useful or important for me. Once an hour, usually at the top of the hour (or when I need a break from a task), I scan the first column. I look for trending topics and repeated retweets and also scan my search terms. If while scanning I notice that someone asks a question that I can answer, then I do so. Sometimes I retweet a message or respond.

By working in this way, I am able to effectively manage a relatively large network (by my personal standards). I also am able to derive significant value from my interactions with this community. But does this touch what MC Hammer has to deal with? I doubt it. But I hope it helps you @TransformerMan.