Here in Australia, there has been a noticeable change in the velocity of conversation around digital and social media in the last six to twelve months. I no longer have the explain “blogging” to every person that I meet. When I speak or do guest lectures, the majority of the audience acknowledge their use of “Web 2.0” in the shape of Flickr, YouTube or even Delicious accounts. And Twitter – well, even the Australian Prime Minister, Kevin Rudd (or his minders) tweet from time to time.

Late last year I suggested that social media was showing signs of “mainstreaming”, but there was little to show by way of corporate marketing adoption. Certainly, the folks at Telstra were leading the way, but there were few others following in their wake. 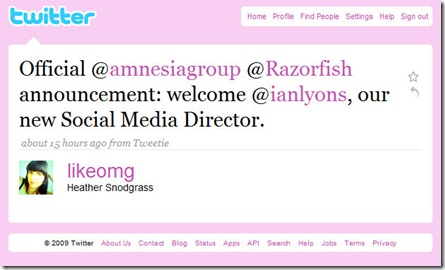 But in the last 24 hours we have seen some interesting announcements that will impact the local agency space quite considerably. During the Sydney Twestival –a global charity event promoted exclusively via Twitter networks (and organised in Sydney by the good folks at CommunityEngine.com.au) – Amnesia Razorfish announced that Ian Lyons had been appointed Social Media Director. This announcement brings additional depth to an already impressive social media team. 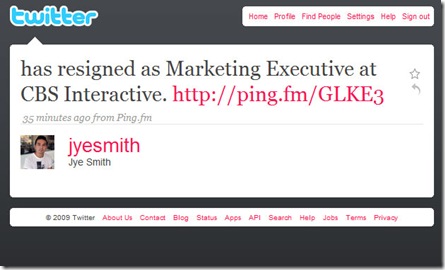 But the good news doesn’t end there. This morning, another of our coffee morning crew, Jye Smith, unveiled his new direction. On Monday, Jye takes on social media for Switched On Media. Again, this announcement was made via Twitter.

It is great to see agencies selecting some top line talent to lead their social media efforts. Now, it’s over to the corporates. Wonder who will be first. Oh, and in case you had not realised – the revolution will not be televised, but it will be tweeted. Get your shirt from Mark Hancock.