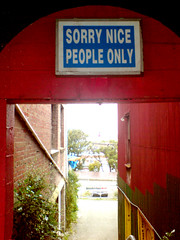 Over the last few days I have been interested to see the many and varied reactions to David Armano’s efforts at fundraising for his friend, Daniela. You can read the original post here (and Scott Drummond’s excellent coverage here).

While there are a number of supporters, there have also been a number of detractors. David, himself, has come out and admitted that this has turned out in a way that he had not predicted:

On that note, there are all kinds of attention being drawn to this including criticism. To say I knew what I was getting into would be inaccurate. My initial concerns were for the safety of my own family, not what the pundits have to say about this … I am not a fundraiser. I'm a dad, husband and full time employee—and an imperfect one at all three. Belinda and I decided not to sit this one out. It's really that simple.

Some of the questions that have been raised go directly to the heart of social media … what does it mean to be “connected”, where does responsibility overlap “connection” and what happens to our TRUST when money is involved?

Scott Henderson, for example, writes a provocative post claiming I Gave $10 to David Armano to Help Daniela and Now I Regret It and Mark Mayhew seems to have spent some time visiting various blogs questioning the trust that been placed in the David-Daniela story. I am sure there are plenty of other articles available – both positive and negative.

David Armano simply activated his network to change a situation – he asked people to donate a small amount of money. In doing so, he put the trust of that network to the test. He put his credibility on the line. He opened his personal actions to the scrutiny of the world (or at least the several thousand connections he has created over the last few years). In doing so, he has raised over three times the amount that he had aimed for (which was $5000).

We have seen the power of social networks before. A similar approach raised over $16,000 for Variety via The Age of Conversation (and Age of Conversation 2 continues the tradition) … and I have been involved in a number of more personal projects that benefited particular individuals. And let’s face it, the job of a marketer is to encourage people to participate (in a relationship of some kind). However, this is not simply a matter of raising awareness, or even raising funds – once it takes hold, these SOCIAL projects become MOVEMENTS and grow quickly beyond our grasp.

As Spike Jones from Brains on Fire explains, a movement can begin with a single conversation:

If that conversation is filled with honesty, transparency, true interest and a LOT of listening, then the first seed is planted. The movement has begun in one mind and one heart. And that’s usually the beginning of something powerful, meaningful and full of potential that gets realized more every day.

And this is what David Armano has begun. It is what a great number of people have participated in. For many, it is their first time. Perhaps they found their participation thrilling, exciting. Perhaps, like Scott, they felt worried afterwards. But this is exactly what social media is about. It is going beyond the merely social. It is moving quickly from words to action. It is about risking your trust. It is not always strategic. It is not even always tactical. But it is ALWAYS personal (for someone) – which, again, is why businesses find it challenging to get started.

Take a look at this great post by Mack Collier and his discussion with Olivier Blanchard – “The point [of social media] is really to help people connect better”. It is through social media that we begin to not just “connect” but find the place where we BELONG.

So if you get involved in a social movement like this … remember, leave your shoes at the door. It’s not “safe” in the way that you would normally consider “safety”. It’s not controlled by an administrator. It’s not overseen by a government department. You might think, after the fact, that your participation could have been different, more tempered, focused.

But your participation marks your initiation into the tribe. You can never unlearn this experience.

The rules are different. And now, so are you.

UPDATE: Alan Wolk has a great post on this topic, and Scott Henderson follows-up yesterday's discussion after chatting with David Armano.

15 thoughts on “Leave Your Shoes at the Door”