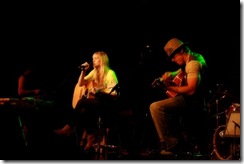 Some months ago, when I began talking to Isadore Biffin about her plans, I was shocked. Here was an eighteen year old girl working on a major project for her final year of high school, and she had a mind to change the world.

Isadore’s idea was to raise funds for charity. Great, I thought. But it wasn’t just ANY charity. You see, a couple of years ago, Isadore had done her Year 10 work experience (senior school) in Ethiopia – working as an aid worker; and while there she learned of the plight of a large number of children who were being recruited into the military in nearby Congo. She was determined to do something about this. The plan was to raise funds to help rehabilitate these kids – to give them a chance to heal from the horrors of what they had seen and done.

During 2008, Isadore began with some fundraising – she gave speeches at local community organisations and schools, she made cakes and so on. But she had a bigger idea bubbling away – what about a concert – like Live8 but smaller? That meant a whole lot more planning and effort … it meant funding, organising bands and speakers, finding a venue (and convincing them to support it); and it meant getting people along to a concert.

Over the last few months, I have been mentoring Isadore … helping her with a marketing plan and advice on how to execute it. We have discussed logos and designs, posters, advertising, social media, competitions, mobilising communities and so on. In all this, Isadore has shown tremendous resolve to move outside of her comfort zone – speaking with journalists, sorting out the various issues that arose, committing to contracts and gaining the support of businesses. She has shown true leadership.

On Sunday night, the Article Thirty-Nine concert was held at The Factory Theatre in Enmore. Over 250 people attended and over $6000 was raised for the Jesuit Refugee Service (the agency running the rehabilitation program). There are some great photos of the event on Isadore’s blog – and Moshcam will soon have streaming video available on the web (Moshcam generously supported the concert by filming it for free).

It just goes to show what CAN be achieved by a strong purpose and a supportive and interested community. And if you would like to contribute to the Article Thirty-Nine cause, leave me a comment.

2 thoughts on “Changing the World, Bit by Bit”