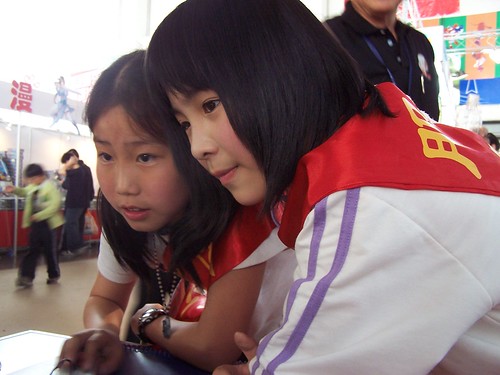 When I was last in China, I spent quite a lot of time with kids like the ones in this photo. I was attending an exhibition in the holiday resort of Hangzhou (which also happens to be one of the regional centres of technology and animation) with hundreds of other vendors. My focus during the event was to engage and entertain kids with some interactive and stimulating digital games.

What struck me was not only the outgoing and friendly personalities of all the kids (except when they were frightened by my Gweilo appearance), but also the fact that these kids were talking to me in English. And I don’t mean the stilted, embarrassing mishmash that I normally trot out as an excuse for “foreign languages”. I am talking real conversation, real questions, personal interest.

These kids took every opportunity to speak with a native English speaker that they could. A few feet away you could see smiling grandparents and excited parents watching as their pride and joy edged ever closer to ask a question. And like kids everywhere, once the ice was broken, the flood gates opened. “What is your name ?” gave way to questions about home, family, school, favourite things. They were bright, fun and engaging kids, open and enthusiastic. And they could all use computers, picked up the games and activities with a few clicks, and were keen to see their names on the leaderboard. Technology was definitely seen as an advantage … and every kid I spoke to saw the potential.

I was reminded of all this today as I read Shel Israel’s third post summarising his findings from the SAP Global Survey. This third posting builds on the Overview and the Seven Key Findings (regular readers will find little to surprise, as Shel, himself, notes), and provides an EXCELLENT snapshot of the state of social media play all around the world. There are some amazing statistics, including:

But the one statistic that really hit me was this — there are now 20 million bloggers in China. That is the equivalent to the entire population of Australia. A great example of SHIFT HAPPENS unfolding in front of our eyes.

One thought on “Number of Chinese Bloggers Exceeds Population of Australia”