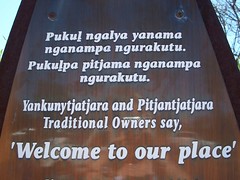 Some years ago I rode across Australia on a motorbike with the aim of visiting Uluru. With a group of friends I had been working through the Australian Reconciliation Council’s self study workbook and wanted to take this further. I wanted to visit "the dead heart".

It took five days riding in the middle of winter to get there — and they were long days. It was bitterly cold, the towns were far apart and the physicality of riding was exhausting. Stopping at each town for petrol, I would stumble into the shop (sometimes the only one in town), hope for a cup of warm soup and a heater and then trudge numbly back for the next stint. When I arrived, finally at Yulara, the town closest to Uluru, I was relieved and thankful to be able to rest and not ride — there were five days ahead of me and I did not know what to expect.

As you approach Uluru the road turns away so that the rock disappears from your direct vision, and as you take the last turn into the carpark, you sweep around toward the base of the rock and the sheer size overwhelms you. It literally towers over you, suprises you, makes you gasp. No wonder the traditional owners believe it is a magical place. But what I was not prepared for was the lushness of the surroundings … you see Uluru captures vital rainwater and channels it into billabongs scattered around the base. Far from being a barren and dry desert area, Uluru supports a vibrant and energetic ecosystem … I was beginning to understand that on this trip nothing was as it seemed — and that complexity lay only just below the surface.

When most people visit Uluru they seek to climb it. To conquer its scale. It is, after all, no mean feat to actually visit — it is located in the very heart of the world’s largest island, takes a long time to reach and a significant amount of money/effort. But there is one caveat. One request, clearly and politely articulated by the traditional owners — don’t climb. There are plenty of other activities — guided and unguided walks, bush tucker treks, spear throwing demonstrations, storytelling and much, much more. Yet bus load after bus load of people line up to scale Uluru. The site of this saddened me.

During one of the many walks that I took around the base, I was told by one of the local elders that the average length of visit was one day. One day? I couldn’t believe it! Fly in, champagne sunset and fly out. Yet there was so much to learn … in one day I had only been able to walk around the base once, hear some stories, meet a couple of the local rangers/caretakers and spend an hour comtemplating the stillness and solitude by a cold, cold billabong in the shadow of the rock. One day was no time at all!

The next day I returned for more tours — there was bush tucker and ghost stories. It was the sharing of public law — the abridged version of Dreamtime stories that can be shared with the uninitiated. The young Aboriginal man telling the story relived the fear of the Devil Dog in every sentence, his eyes burning bright, his smile wide and his sense of trepidation palpable. This was a sacred story. But a sacred story for beginners — us. We were visitors, guests — but we would be gone in hours — there was no need to go too deep. It was clear that we were not honouring the land.

On the third day, approaching the car park, the rangers passed by in their truck. Recognising my bike they flashed their lights and waved. They were amazed. Pleased … well more than that … they were excited. They loved that someone stopped for a moment, listened, took some care. I was already undergoing some strange metamorphosis, like I had ingested thousands of kilometres of space and was floating in the wild silence of the desert — for while there was certainly a rough beauty in the smallest plant, it was also clear that death could come quickly and unexpectedly for those unused to the conditions.

By the fourth day, the rangers and I were friends. During tours they would take me aside and show me special things … small plants, the tracks of a kangaroo or centipede, the berries of a hardy desert tree — or encourage me to experience the lemon tang taste of an ant’s behind. My small investment of time changed the tenor of my entire experience — and the welcoming was generous and warm and overwhelming. But it was equally clear that there were problems.

Two hundred years of disadvantage, poverty and isolation had taken its toll on the community. And for every success — and there are many — there were also failures, problems and dangers. The same people who would passionately and generously share stories and culture in the day could be seen, later, desperately drunk, bored and lost. Despite the strength and pride of the Aboriginal culture it could not protect some from the self-destructive behaviours that grow out of institutionalised disenfranchisement. But where did the blame lay? How did this happen? And what could be done about it?

It is many years since my visit to Uluru, yet the experience remains with me. It haunts me. It energises me. It lives as a sad shadow in my consciousness but also as a symbol of a shared future.

On the way back I shared breakfast with a fellow motorcyclist who worked in an Aboriginal community. We talked about my experience and he shared his deeper, longer and more protracted experience. He smiled at me and said., "It is complicated … you have obviously been working in the communities?". No … just a visitor. "There are no easy answers", he said.

As we speak, the Australian Government has launched an initiative that seeks to unilaterally change the way that "troubled" Aboriginal communities operate. And there is no doubt that there are troubles … but the issues, the root causes, go far deeper than a quick fix. They lie outside of the realm of "financial assistance" or "DEP" or any political doctrine. The noblest of causes can be implemented in ways that ignore the needs of those MOST affected … and the best intentions can also be perceived as a form of imperialism. We can neither proscribe change nor ignore obvious issues. There is only a fine line to walk between the two. But what is manifestly true, is that we are ALL impoverished when our brothers and sisters are diminished. I am all for action … but not at any cost