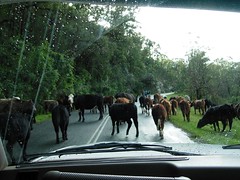 I wish I had taken this photo!

For those of you watching the worldwide weather reports, you will know that the East Coast of Australia has been experiencing some fairly heavy storms over the last week (and more to come this week). This time last week I was a little concerned as I have some friends living in low lying farm lands in the Hunter Valley, and we knew they had to evacuate. Here in Sydney, while the weather was bad, it was not as dangerous as that. The only issue I had was lack of Internet access.

But in the scheme of things, there were no dramas.

I had planned to take a few days off and visit the Blue Mountains outside of Sydney, and had been squirrelling away some blog posts with the aim of using Typepad’s cute "publish on" feature. I had used it before and it sort of works (though I am still to figure out whether the "time" is based on MY timezone or the server’s). BUT by the time I left for my brief holiday, my Internet connection was simply not working.

So now, over this weekend, I will edit and re-post some of the posts that I had saved up for you all. Unfortunately I missed the BrandingWire launch … but since it is done, I will still post it. And if you have not done so, check out the group’s efforts here. Simply excellent!

Oh, if you are wondering, I had a GREAT time away PLUS my friend who was evacuated was able to return to her home intact. Thanks for all the email in the meantime.

One thought on “The Storm and Holiday Passes”