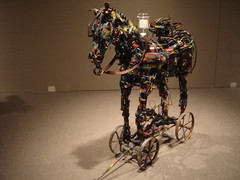 Sometimes the blog debt gets out of control — there are too many things to think and write about, too many good ideas to which I would like to contribute and too many conversations happening that involve areas that I am passionate about or interested in. On top of this there are side projects, main projects, friends projects … there is work, family, friends, email, cars, bikes, photography, movie making, book reading and technology. Busy, busy …

Oh, and blogging … how can you keep up with the torrent of life? What gives and what takes? And how do you decide or draw the line?

I was surprised by the beginning of this year — there was an urgency and pace to January that caught me unprepared. But then, I thought it would settle down into a new rhythm. I was wrong. I misjudged the intensity. I noticed that my own blogging had increased — I was doing one, two, even three posts per day — and sometimes this still was not enough.

Others were doing the same … all over the blogosphere the energy seemed to be ramping up. There were more posts, deeper insights and smarter use of multi-channel communications tools. All of a sudden blog posts were not enough — there was SlideShare, Twitter and Vox and Tumblr — as well as the stalwarts, Flickr and YouTube. Wow …

But now … all of a sudden, there seems to be a sense of blog fatigue. Some are choosing not to continue their blogs, others are posting less. I get barely a peep some days from Twitterers … Me? I continue to write here, but have not posted over at MarketingProfs for some time (sorry Ann), and even the posts that I have written here have tended to feel (at least to me), a little light on. A little too insubstantial. The faster horse that I ordered for Christmas never arrived (must have been a bad boy).

Yet, while some blogs go dark, I have a feeling this may just be the fatigue of passionate early adopters. You see, despite Dave Sifry’s positivity, blogs are still on the periphery, and no matter how many of us bloggers or marketing folks think otherwise, we really are experimenting with a new form of narrowcast communications. In a way, it is like TV in the 50s (at least in Australia), when very few houses had televisions. The TV personalities were little more than amateurs compared with today’s slick media professionals.

During TV’s early days the rules and methods of performing and communicating were being invented and extended during each and every performance (remembering that most TV was live back then). Much was being learned in front of and behind the camera, and the viewing audience was also learning a new way of consuming media, engaging with brands and becoming used to inviting strangers into their living rooms. Of course, the stars came and went, making money, finding fame and in many instances, disappearing into early retirement.

Blogging is similar to this. Even those who have been blogging for some time are still learning the rules, methods and approaches. Sometimes it feels stilted, unprofessional, raw and visceral. Sometimes it is a bit too close to … well, real life. There will be stars that shine brightly and make millions. There will be many who come and go with barely a ripple. But there will come one of Gladwell’s tipping points, and it won’t be in terms of mass — it will be in terms of acceptance. You will know that day, as you will no longer need to explain what it means to "blog". And while the names that we all know from some A or Z list may no longer matter in the way that they do now, the mass of bloggers currently writing their first post or finalising their last are doing one clear thing — laying the foundations of a communications channel that will outlast us all.

I will need more than a faster horse to get me to the end of that race!

16 thoughts on “A faster horse”