One of my first jobs out of university was as an editor. I worked in a legal publishing company where the challenge was to update our legislation and commentary volumes more accurately and faster than our competitors. Actually, this was a secondary challenge — the primary challenge was to make our markup and changes quickly but also accurate enough to pass the review of our managing editor … the eagle-eyed Paul F. 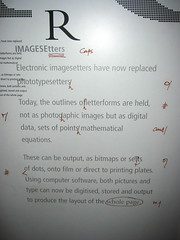 Of course, this was at a time when editing was still done mostly on paper. So there was plenty of "cutting and pasting" … with real scissors and real glue. And each time, as I approached Paul’s office (after double and triple checking my work), I would think "this time I have got him". Each time, such was my optimism, I thought that there would be no errors, that Paul would not find anything out of place, and that I could send my manuscript on for typesetting straight away.

Did this make me a good editor? No, I don’t believe it did. Did I take Paul’s feedback personally? Only at first. Then I realised that he was exactly the same in any environment … he even spoke to his mother the same way. Eventually I realised that Paul found it difficult to communicate in anything but a hierarchical way. That is why he liked to work. It is where he felt most in control.

As my career progressed, I found that I was increasingly asked to provide other with feedback, with mentoring and with advice. I reviewed their writing, their planning, their concepts and even their performance reports, and soon I found that it is much harder to give feedback than I ever thought possible. Unfortunately it does not seem to get easier with more experience. But today, Seth Godin has a great piece on giving feedback. His focus is on providing analysis, not commentary.

It is all about peformance. Look at what needs to be improved, focus on the big picture (not the typos) and make sure that, if you find something good, let the writer know. Read the whole post here.

By the way, I did become a passably good editor, also thanks to Paul’s persistence. Sometimes criticism is harsh, but there is an art to giving it, and an art to hearing it. Just because it feels personal doesn’t mean it is not true!

Thanks to Adactio for the photo.

One thought on “The Art of Giving Feedback”