Living, as we do, in a time of rapid change. Of transformation and uncertainty. It can be difficult to see what our long term future holds.

You can see it in the words we use to describe our lives. These words are flat. Uninspired. Transactional. We have entire governments swept to power on the back of the laziest of phrases and political slogans masquerading as thought-through policy agendas.

But we have not arrived in this desolate landscape randomly. It is the end-result of a thousand micro choices that consolidate our misery.

It is as if we have abdicated our personal responsibility for imagination in favour of a strange wariness of close fears. Today, in Australia, it was announced that we now hold the record for economic growth without a recession. We have experienced 26 years without interruption to our prosperity. Twenty six years without a downturn.

We have a generation of people who have known only growth. There have been few labour strikes. Precious few public protests. This perceived prosperity has dulled our senses to our own personal agency. The storytellers who ignite our hearts and passions no longer tread the public boards of our most important debates – they pop up in our Facebook news feeds, talking at TED or singing on “Insert Your Country Here’s” Got Talent.

But this can change. The story is the trick. And if we do want to reclaim our sense of the future, then there’s much to learn from the careful crafting that goes into the stories of digital media’s emerging heroes. Just watch this clip from America’s Got Talent. Think about the one clear message. See how you are drawn in to this story. Understand how and why you respond to what you see and what you hear. And see how the foreground, backstory and framing create the conditions for you to take the story into your heart.

Then think about what you can do to change your sense of what is possible. You only need try. 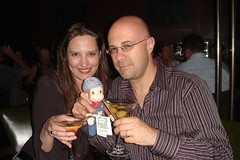 book with 100 of the world’s leading bloggers, social media was still a rough and ready frontier. Two more editions

and three years later, many of us are still having the same conversations – partly because more businesses and more people are beginning to see value in the space, but also because innovation is like a spiral, folding back on itself in ever more complex ways.

With this in mind, I thought I’d publish here, my article from the first book – the Promiscuous Idea. To me, it still feels as relevant as it did in 2007. If you haven’t got a copy, consider buying one. It’s a great primer – and all the profits (still) go to a great cause.

We are living in a time of proliferation. Never before has the marketplace of ideas been so free, the barriers to entry so low and the willingness to collaborate so powerful. In moments, a concept can be explained, shared and tracked on a single blog — on the other side of the world, this idea can be modified, expanded upon and discussed. Seconds pass and more voices are heard — a version transmutes into new forms … being picked up as a podcast, a video, an older-style presentation deck. From a single creative impulse, a legion of additions, modifications and transmutations can spread in minutes, hours, days and weeks.

Even months later an idea can come full circle. Someone, somewhere can stumble upon a “stale” idea, investing it with new energy, new context and a new perspective and the cycle of proliferation begins again. What this means is that our ideas are constantly in a process of reinvention.

What links an idea and draws us to it is the “story”. And the power and gravitational pull of the story brings us back to it time and again. In the Age of Conversation, whether we are marketers, activists, educators, politicians, academics or citizens of the world, we are all becoming the connected storytellers of this new era. This presents new challenges but also significant
opportunities for brands, consumers and communities.

We are now dealing with a different type of story. Where once we had a beginning, middle and end, as readers and storytellers we can fall into a story at any point. We can link into the middle of a raging debate or witness the genesis of an idea that can change the world, and the narrative that we
are dealing with is no longer linear but multi-textual, layered, overlapping and promiscuous. The ideas and stories care not for their creator but freely leap from one mind to the next — sometimes appearing simultaneously across the globe — with storytellers tapping into a powerful worldwide zeitgeist.

The new art of conversation relies not on a sense of ownership but on a willing openness on the part of storytellers of all kinds. In fact, the jealous storyteller may well find that “their” ideas, brands, concepts or other “intellectual property” will laughingly thumb its nose at its creator and walk off, hand-in-hand with the idea-next-door. Whether we like it or not, our brands, ideas and
stories are no longer our own … they are out there promiscuously reinventing themselves word by word.