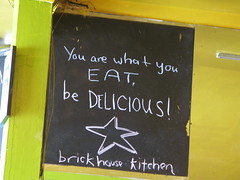 You are what you eat, be delicious!
Originally uploaded by Caroline on Crack

As we gear up for what is likely to be a challenging year, it is fascinating to look back 12 months to see what was BIG, or important or "going to happen" … and see what has changed in the intervening period.

Last year, I participated in an interesting meme looking at my patterns of media consumption. How is it different this year?

When it comes to understanding the impact of digital media on the way we live our lives, there are few who dig as deeply as Michael Wesch. This is a recording of his speech at the US Library of Congress in June. And while the presentation starts off with some impressive statistics about the number of videos uploaded to YouTube (9,232 hours per day — 88% of which is original), the fascinating aspect of this presentation is the focus on story. In his own words:

For the following 45 minutes or so, Michael Wesch leads us through a discussion on the way in which digital media is celebrating and connecting people in entirely new forms of shared experience. He starts with Numa Numa and his famous The Machine is Us/ing Us. Interestingly, the latter was initially launched the Wednesday before Superbowl Sunday — and as he had quickly reached an audience of over 200 people he sent a screen shot to the head of school for his permanent record. By Saturday the audience had grown to over 1100 viewings and the video had been posted on Digg. As you probably know, this video has at current count, around 5 million views.

As an anthropologist, Michael Wesch is providing a fascinating analysis of the shifts in society and culture that are already underway. In this video he shows how user generated content + user generated filtering + user generated distribution is reinventing the way in which we create, find and share branded and unbranded material via the web. This potent mix is ignited with a final piece, which Michael calls "user generated commentary" — ie blogs — however, I feel this is better represented as user generated CONTEXT. When blog authors share content with their readers, they create a context into which the content becomes more accessible and digestible for their particular audience. It is this final piece which is an essential part of any digital strategy. I fully recommend setting aside an hour to watch this presentation through, however, if you have limited time, I have written my thoughts below.

About 12 minutes into the presentation, Michael turns his attention to the media. Here he talks about the media not as technology but as a system through which human relations are mediated. This is given more context by showcasing the way that remixing and remastering videos allows others to participate in a video meme (eg Charlie Bit My Finger and its 100+ responses). Clearly this is not just about claiming 15 seconds of fame. This type of participation goes to the very heart of the P-L-A-Y (P-ower, L-earning, A-dventure, Y-elp of surprise), delivering an experience that crosses the chasm that is imposed upon us by culture, geography, suburbia and even the isolating experience of TV viewing.

But the experience of this is dislocating. At 23 minutes, Michael explains "context collapse" which is what happens when we first begin to "participate". For example, think back to the first time that you wrote a blog post, think about your first comment on another’s blog. By participating in this way, you release your thoughts into an environment in which you have no context. You don’t know how it will be read or understood, nor where or when. You don’t even necessarily "know" your reader. Now, apply this same thinking to video. You are "speaking" or "presenting" to a small webcam, not a person. Well, not yet anyway. The human interaction is delayed, mediated, spread across time and space. It takes time for "participants" to become used to this new mode of delayed being. It is, perhaps, why the easiest way to understand blogging is to participate.

At around the thirty minute point, Michael walks us through the topic of cultural inversion. This describes the tension that we (in a cultural sense) experience as participants. On the one hand we express individualism, independence and a keen commercialism while desiring community and relationships within an authentic context. YouTube, and to a certain extent, other social media, allow us to experience this tension as a deep connection with others without the responsibility that comes with close, personal relations. It strikes me that by adding a third party into this equation, for example, a "good cause" like a charity, you are able to move quickly from this state of mediated connection to "community actualisation" (thinkng a community version of maslow’s hierarchy of needs).

But what happens when this is "gamed"? Michael explores YouTube’s authenticity crisis about 36 minutes in, using EmoKid21Ohio and LonelyGirl15 as examples. Ten minutes later the topic of copyright is broached (any remixing is basically illegal). Using a clip from Lawrence Lessig’s TED talk, the challenge is contextualised — the culture has moved on and the law is struggling to recontextualise its own relevance:

You can’t kill the instant the technology produces, we can only criminalize it. We can’t stop our kids from using it, we can only drive it underground. We can’t make our kids passive again, we can only make them "pirates" … and is that good?

The presentation is wrapped up by video quoting bnessel1973:

Some people say that the videos we create on YouTube should be created in hopes to change the world. I have made mine to help me live in it.

Being a lover of good storytelling I live a life of disappointment between the hours of 8pm to midnight. With a vast array of low-rent, poorly executed television, there is little wonder that I turn my attention to the plethora of quality (and low-rent) content available online. And while I am sometimes appalled by what I see online, I have the control to simply move quickly to something that at least offers the promise of an engaging storyline, believable characters or even a toe-tapping number or two.

And given that Josh Whedon, the master storyteller behind the Buffy the Vampire Slayer, Angel and Firefly series has just released a new series, there was reason to hope. But where can one find this? I scoured the TV guides only to be beaten into a dull submission by old formats and "celebrity talent". At last I turned to Twitter to find salvation — and it came to me in the shape of something horrible. Dr Horrible.

That’s right. Josh Whedon’s newest series is available exclusively online. You can watch it streaming via the innovative Hulu format or download via iTunes. And at 15 minutes an episode, if it doesn’t capture your attention, you haven’t wasted your valuable time — quality content is only a click away. Just a shame they didn’t add interactive channels to the format.

But, it just makes me wonder about the future of media. And the future of brands. And it seems, the answer is the same. Content. How else do you think you will attract the slim attention of audience 2.0? Time to stop reading and start participating.

The months of June and July 2008 will have seen two major initiatives aimed at bringing the Web 2.0 and publishing industries together — Pubcamp organised by Jed White’s iTechne, and The Future of Media organised by Ross Dawson’s Future Exploration Network. Here in Australia, this is big news, and indicates a significant shift in the business perspective of both groups — clearly there is a need to bridge the gap between what can roughly be described as "New Media" and "Old Media".

Yes, that’s right … the future of media is going to touch each and every one of us. The impact of the shifting balance between new and emergent forms of media and "traditional media" will be far reaching and may, perhaps, change the nature of the business landscape for years to come (of course with the rise and rise of Google, it could be stated that the game has changed irreversibly). But as Alisa Miller points out in this TED talk (vis ShiftedPixels), the media has taken a particular, and distorted view of storytelling in recent times. And, it seems to me, this myopic focus on easily digestible stories, has fuelled the growth of social and new media enterprises — our interests and curiosities have not been sated and we have begun to look elsewhere for those stories.

As Alisa points out, younger Americans know less about the world today than their counterparts 20 years ago. However, this is not an indication of a lack of desire for knowledge — it is the result of the homogenisation and filtering of what is considered "newsworthy". Even the great winner in the new media stakes, Google, can be considered guilty here — with "Google News" also opting for narrow focus storytelling in a broad vision world.

With an ever increasing number of people participating and contributing to emerging forms of media — and an understanding that we, as media consumers spend more time viewing both "traditional" media online as well as new media sources — it is clear that our strategies for engaging with our markets/audiences/consumers require new approaches. It seems that we need to re-think "media" itself — and stop talking about the divides I have reinforced above. Perhaps it is not about "media" but about the people that the "media" want to reach and engage. And if we start thinking about this, if we start putting communities at the heart of our storytelling and engagement strategies, then maybe we can begin to move forward together.