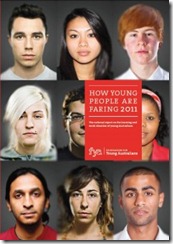 Can you remember when you first left home? Do you remember what it felt like – that first week – being solely responsible for all aspects of your life? For me, it was thrilling, but also daunting. It was really only in the silence of that first night that the reality set in – childhood was seriously over, and this new life was entirely in my own hands.

I finished school during an economic recession and walked into a competitive and shrinking job market. I’d done well enough at school yet still found it hard to secure that vital first job. I can remember feeling the pressure, the desperation and exhaustion of doing interview after interview. It took longer than I ever expected to retire from the ranks of the unemployed.

But in 2011, times are better, right? We are more economically stable – secure and growing than we have been in decades. Some would even say, we are “booming”. But the Foundation for Young Australians’ new report How Young People are Faring 2011 suggests that this prosperity and wealth is not “trickling down”. In fact, key findings indicate that young people are more vulnerable than the rest of the population to economic instability:

In my view, this means that we need to redouble our focus on catapulting young people into the workforce. It’s about ensuring they have the support, confidence and capability to transition into the world of work in such a way that it benefits all.

This is precisely why the work that I do with local non-profit Vibewire is important – it’s pointless having opportunity available if you aren’t able to understand it, grasp it and accept it. The team at Vibewire work everyday to build resilience, capacity and skills through a vibrant internship program, this year generating over 20,000 hours of experience for young people. You can support Vibewire, become involved as a mentor or even as an intern. Please do – you  won’t regret it.

The full FYA report is available for download here.

One thought on “How Young People Are Faring in 2011”