I can remember years ago, being obsessed with email marketing metrics. I loved experimenting with email blasts to see what would work – from subject lines and call to action messaging right through to the time of sending. And it was this last one – the time of sending that really made a difference. Sometimes the open rate would double within a 20 minute window (and the same with clickthroughs).

But what about tweeting? Is there an optimum time for sharing a message or a link?

A su.pr way of distributing and measuring your tweets

StumbleUpon is one of those social media platforms that have been constantly hovering in my consciousness for years, but it never really captured my imagination. Occasionally it would remind me of its presence with an avalanche of traffic hitting my blog after a well timed “stumble” from some generous soul, but it never made it into my arsenal of social media tools. Until now. 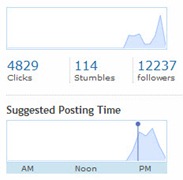 StumbleUpon is a social network that allows its members to rate and review websites. The underlying social network, recommendation engine and tags allow us to easily discover content that matches our own interests and tastes, and to share it with others who share similar interests. It uses the simple “thumbs up / thumbs down” mechanism and can bring your website to its knees if a well-connected SU member rates you well.

But like many people, I have been using Twitter for this sort of interaction and recommendation. Bit.ly – or sometimes Hootsuite – are my Twitter tools of choice to shorten long URLs and to provide metrics on clickthroughs. But what I really needed was a way to know WHEN to tweet. I didn’t just want analytics, I wanted insight. That’s where StumbleUpon’s su.pr comes in.

Su.pr combines the URL shortening and funky reporting of Bit.ly with the added depth of StumbleUpon. So now I can share a link with Twitter and ALSO share it with StumbleUpon. And in a relatively short period of time (even a few days), I have been able determine when the most effective tweeting times are.

As you can see, the two most effective times appear to be just before 7am and just before 5pm. That means just before most people get to work and just as they are finishing up for the day (in Australia). The 7am tweets also correspond nicely with the afternoon on the west coast of the USA.

And I know this after using su.pr for just under a week. As more data is gathered, I am sure these suggested posting times will shift. But thus far I have been super impressed.

There is plenty more to learn about su.pr – and you can certainly dig down deeper into individual posts. But there’s also much you can do with StumbleUpon such as reviewing sites and building your connections.

But what are you waiting for? If you haven’t joined su.pr, do so. Install the bookmarklet to make link sharing easier, and connect up your Twitter account. Oh, and don’t forget to share this link and vote me up 😉

One thought on “Using Su.pr to Find the Best Time to Tweet”