Over the last month or so I have begun researching my family tree. It’s a fascinating research project that involves matching names with stories and stories with memories. It combines official government records with personal letters, and certificates with box brownie photos. I have been amazed at what I have been able to find – and how many traces my ancestors left as they lived their lives.

Of course, the ease with which I can find historical data relies on the digitisation efforts of various government departments around the world as well as what must be massive projects undertaken by various private businesses such as Ancestry.com and Genes Reunited who provide scans of various records from electoral rolls to immigration/passenger lists. All this is bolstered by the work of volunteers who manage local historical groups or genealogical societies – producing books, databases and websites.

One of the most interesting pieces of information that I found relates to my grandmother, June. She died when I was about 12 but looms large in my memory. I wanted to delve deeper than the more generic official records would allow. And when I happened across an electoral roll record for her – I was intrigued. What would her daily life look like? What did the streets look like in her day – and how different are they now? 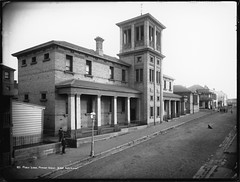 Then I remembered that the Powerhouse Museum in Sydney has an extensive collection of historical photos available on Flickr. I trawled through the Tyrell Collection, seeking images of Pyrmont from the 1900s, finding a great image of the local public school. Surely she would have walked past this building as a young woman.

But what of her home? I had heard that a large number of buildings were demolished during the early 20th Century. Bubonic plague, poor sanitation and redevelopment had seen many neighbourhoods razed to the ground. Perhaps her house had 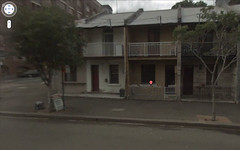 been one of them. On the off chance, I put the address into Google – perhaps there was a story captured somewhere that was relevant. Useful. But it was Google Streetview that made my eyes pop. Clearly this was the house that she had shared with her brothers, mother and sisters – crammed together in Pyrmont.

It made me wonder. We are already sharing so much of our lives online – in a readily accessible, searchable format. In a way, we are self-documenting our lives for future generations. They won’t need archaeologists to dig through layers of sediment to determine what we ate – they’ll be able to read our Twitterstream. My descendents will be able to trace my movements via Foursquare, cross match it to my blog posts and learn about my friends and acquaintances via Facebook.

Our private histories are – with a small effort – open book stories ready to be pieced together by anyone willing to make the effort. From a family history point of view, this is fantastic. It is also a continuum that began hundreds of years ago. After all, I have now seen NSW Governor Darling’s handwritten script permitting the marriage of my fourth great grandmother to a man transported to a convict colony for life. I have seen the signed ticket of leave granting their freedom, and I have seen the X which is the mark signifying their consent to marriage.

In the torrent of life and the every flowing tides of history, sometimes these stories are the only things that anchor us – to our past and our present. And for many of us, the trivialities that we share – a coffee spot, a “tweetup”, a funny website or link – contain not just banality, but the full emotional force that carries across time and space. And this, perhaps, is what “social” media is really all about.