Earlier this week I attended a lunchtime seminar hosted by the Insight Exchange. There were some fantastic presentations on the nature of influence from:

Ross Dawson has a great summary of the presentations and the following conversations that freely jumped between audience and panel. Ross also shared his Influence Landscape framework which seeks to visually represent and connect the way that people think, behave and spend. It is a handy visual tool that disassociates the simple causal link between “social media” and “influence” – showing that there is much more at play. 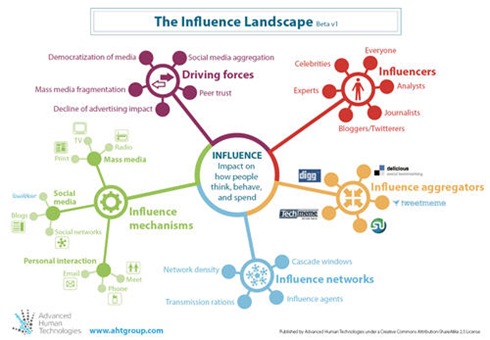 And reinforcing this complexity, Beth Harte has written an excellent post on influence, reminding us that it is not the strong links between people that create movements, but the weak links. This strength of weak ties actually goes a long way to explaining why “viral” marketing is hard to predict. However, it is the work of Duncan Watts and Peter Dodds that shows why marketers may, in fact, be looking in the wrong direction. As I have written previously:

The findings of Mark Granovetter’s research into social networks demonstrated that it is the WEAK ties that lead to action. If this is the case, then influence may only play an important role in the very early stages of branding efforts — to facilitate AWARENESS. But as consumers begin to engage with the brand messaging and various forms of communication, it appears that the power of the social network lies not in the level of influence of any select group but in the susceptibility of the audience to contagion.

Why is this relevant? Because on some level, our role as marketers, strategists or activists is not simply to raise awareness. Our job is to change the way that people think, or act — we want to prompt a change in perception or in behaviour. As marketers then, perhaps our best efforts — and probably our strongest DIGITAL STRATEGY lies in activating the weak links and leaving influence to the mass/traditional media (or to those bloggers who have mass audiences).

It is why we should forget the influential and embrace the curious. And maybe, just maybe, we use Ross’ map to help us surface them.

5 thoughts on “The Landscape of Influence”