As I have mentioned elsewhere, Twitter’s growth over the last few months has been astounding. But a quick glance at the history of search references to Twitter demonstrates exactly what is going on – exponential growth and adoption that, for the moment, eclipses competitor sites. 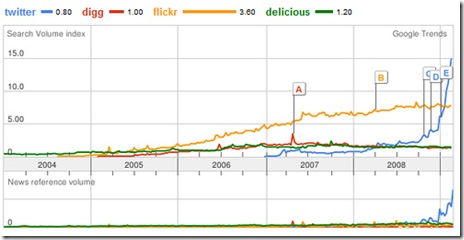 And while this indicates good growth for Twitter, as Ronnie points out, Twitter has what Digg and other social sites don’t – a comprehensive real time search engine. At first, Twitter’s purchase of Summize appeared to be anti-competitive – after all, Summize were indexing and reporting on the Twitter-stream data better than Twitter could – so it made sense to purchase and close them down.

For months now there has been speculation around Twitter’s business model – but then a round of capital raising in February 2009 secured $35 million squashing the intense questioning. Clearly, venture capitalists would be party to business strategy discussions that you and I are not – but given current financial constraints on many companies, investing in so far unproven business models could be considered high risk.

Gary Vaynerchuck, however, takes the view that Twitter may, in fact, be following a highly successful business model – Google’s.

But how would you feel about this type of context-based advertising? Is this the first step towards a semantic web? And how would this work with the hundreds of applications that have flourished thanks to Twitter’s open API?

I certainly don’t have answers at the moment, but it is interesting to ponder. And while I never really thought that my words were worth millions – it seems that they are certainly valuable – to some like Google and Twitter more than others.