The dust has now settled a little on last week’s Ad:Tech conference here in Sydney and I have had a chance to catch up on some work, reading and even a little writing.

There have been some great summaries and wrap-ups of the event – which has been very useful – particularly as there were three concurrent streams running at any one time. So, despite missing out on two-thirds of the conference, I can still glean a little of the proceedings thanks to the blogs and Twitter streams of other attendees. (Neerav Bhatt has a great overview of the Twitter stream and Jenny Williams sums up the even on the Ad:Tech Brain blog.)

Both Ben Shepherd and Mark Jones provide great overviews of day one; and Carl Moggridge breaks down the sessions. 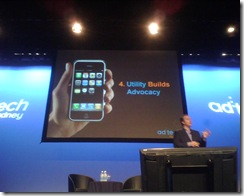 For my part, I thought that the keynotes could have gone deeper. Nick Brien from MediaBrands took the big picture approach and got the day rolling. He suggested that “Marketing 3.0” required adjusting to some new realities – but did not take the opportunity to delve into the agency world to suggest how these new realities may play out. I did think this was where the speech was going, but I was wrong. However, he did remind us all that “Promotional driven marketing opens conversations and broadens appeal of your brand” – something that is too easily forgotten in the rush to produce the next glossy TVC or shiny website. 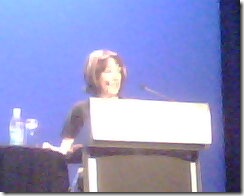 On the second day, Kim Niblock, MD of BBC.com promised much but ended up delivering what was mostly a media kit for their new site. They had done some nice work on attitudinally profiling their audiences – but that really was to be expected from a quality outfit like the BBC. It will be interesting to see how robust this commercial foray will be for the BBC. I am sure the ABC will be watching closely too. 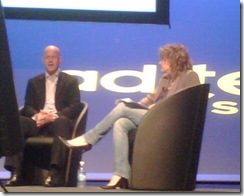 The social network panel with representatives of all the major platforms were interviewed by Jenny Williams. I don’t think I was alone in feeling that Facebook, MySpace, Friendster et al are all beginning to transform themselves into 1990s style portal publishers. Jye Smith suggested that social networks should pay more attention to the thing that made them successful in the first place – the people who use them. As the session closed, I asked whether we would see any differentiating innovation in terms of the platforms or whether they would continue copying each other’s features and functions. And in the last few days, as Facebook’s attempt to out-micro-blog Twitter rolls out around the world, this question seems more pressing than ever. I have a feeling that we will all tire of this cannibalistic behaviour sooner rather than later.

The panel discussions were opportunities for a little more depth. And while there were initial misgivings around the balancing of the conference agenda, it soon became clear that the social media stream was worth it’s weight in gold. Each of the sessions were packed out, often with standing room only.

The digital strategy session ended up being more about the execution than strategy; and the Johnson and Johnson case study while solid, ran in 2007 and felt out-of-date. 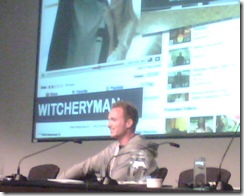 Julian Cole and Fake Julian Cole stirred up the audience with some theatrics and audience-directed questioning in the session on “dark marketing”. Of course, the question was raised around the use of fake virals – and the recent work for Witchery by Naked. While the panel seemed to think this was not the way to go for brands, I tend to agree with Iain McDonald:

There are better, bigger, broader opportunities to engage consumers using social media that can still be authentic, mysterious, realistic. Yes it’s a creative challenge but if we can start to get this right there are big wins for consumers, clients and agencies alike. 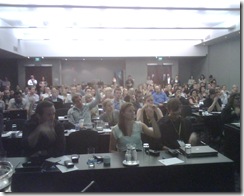 Jye Smith, Laurel Papworth, Mike Hickinbotham and I spoke about the relevance of Twitter. It felt like it went well, but time flies when you are in front of a room of people … and it felt like we were out of time before we really got going. Jye facilitated the discussion well – diving into the audience to take questions and keep us all in order. Mike stepped us through some of the approaches and lessons they learned from launching the @BigpondTeam on Twitter – fingers crossed his presentation will be shared at some point. Iain McDonald, Stephen Collins, Lesley White and Katie Chatfield created a powerful buzz when talking social media measurement. “Data is everywhere, but insight is rare”, suggested Katie, while Lesley explained that there should be a focus on the rants vs raves in any conversational analysis. There were some great points made by all the speakers and Katie shared this fantastic presentation on the tools and techniques that any digital strategist will love.

Overall, this felt like a great conference. There was plenty of good discussion and the panels worked well (for the most part) – and the vibe was strong. There were a couple of talks that were borderline pitches, but they were in the minority. I would have liked to have seen more detailed cross-over discussions between traditional advertising and social media – it seems that there are two distinct points of view with a chasm of understanding separating the two. Perhaps then we will see the type of fireworks that we really do need to see to move the industry forward in a meaningful way.

For other perspectives, check out Matthew Ho, Charlie Robinson and Emma Kate Tyler. Oh, and don't miss out on Simon van Wyk's excellent rant on Mumbrella.

UPDATE: Siddarth also has a nice wrap-up of some of the Twitter stream and also shares the video from the Kodak presentation.

7 thoughts on “A Personal Take on Ad:Tech Sydney”