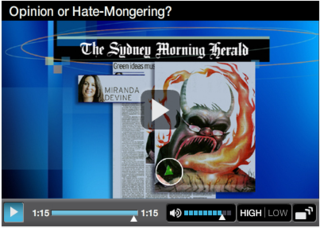 Further to my post on the atrocious piece by Miranda Devine and the Reason I Unsubscribed from the Sydney Morning Herald, the folks over at ABC TV's Media Watch weighed into the debate asking whether this type of article is opinion or hate mongering.

I noticed a number of comments on Twitter as the program aired. But the video is now available on the ABC TV website, so you can see the segment for yourself here.

The article itself, the illustration used in the original piece and the editorial decision to place the article on the front page of the Sydney Morning Herald website were discussed. Note that the image in question has now been removed from the website. Calling out the noted "hanging from lamp-posts" quote, Jonathan Holmes suggests:

That's not opinion-writing, Miranda. That's hate-mongering.
You and your paper, which saw fit to blazon your ugly piece across the front page of its website, should both be ashamed of yourselves.

Now, if only the ABC would allow their media player to be embeddable …

3 thoughts on “Opinion or Hate Mongering?”