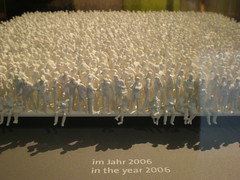 If you are a marketer, and you are thinking, talking and working in “social media”, it is easy to forget that your work is anything but mainstream. Over the last couple of years, a strong, global community has evolved — bringing a great deal of experience, discipline and creativity into what WAS an emerging medium. In the US, in particular, social media has moved from a peripheral activity to a much more influential position — thanks in part to the pure-play social media agencies and their focus on cross-disciplinary approaches to business.

And while there have been some successes, there is still some way to go before we can seriously consider “social media” to be an accepted and acceptable (or even leading) element within the overall marketing mix. For while it is clear that the general population has shifted its media consumption away from “traditional” channels in favour of the Internet and the plethora of socially-oriented networks — there is still work to be done in codifying the metrics in a way that is easily digestable for business.

It should be an interesting time.