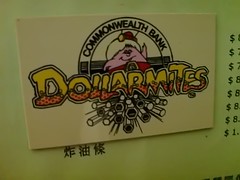 It was exciting. Truly exciting. The tall man with short, dark hair leaned down over my desk and put something small and dark on my desk. I looked closely. It was a grey book with black writing on the front. The book itself, sat neatly in a plastic sleeve — clear on the front and a bright green on the back. A quick smile. A word of thanks. And he was off to the next child waiting expectantly.

Like all the other children, I eagerly picked up the package, slipped the book out and felt its surprising weight in my hot little hands. Inside the book it was a new world. There were no pictures. It was neat. Official. And there was my name, written in capitals in full. At the top of the page, a single number shone out. 4.00. It was a whole world in numbers. My life savings. Four dollars. And I was as proud as a button.

In my school, like in many others across the country, the Commonwealth Bank would sponsor children in primary school so that they could open a bank account. In many cases, this is the first "official" document in a child’s name, and for me, it was a vivid moment of self identification. This program helped to establish a pattern of savings, to introduce us to the concept of banks and "interest" — but it went further. It was part of our education … it included a visit to the bank — an excursion. There was an almost mystical induction into the world of finance and there was the weekly repetition of class deposits — each Wednesday we would bring our savings into class in small brown envelopes. Magically our passbooks would return at the end of the day with an updated total.

From a branding point of view it was an absolute coup — the bank through the "Dollarmites" program has early and sponsored access to a new generation of customers. The ritualistic induction created a memory and provided an experience unlike any other, and our behaviours were moulded and reinforced each week.

With such a powerful program in place, it confounds me that the Commonwealth Bank would do anything that would bring this program into disrepute. As reported by the Sydney Morning Herald, a young girl had opened a school account and was waiting for the arrival of her passbook. But instead of a crisp new book, she received a curt, impersonal letter:

This rejection was based on the child’s mother’s credit rating and previous dealings with the bank. And while the bank has since changed its mind and offered the girl an account, this impersonal action will have had a number of impacts on the girl, her family, her network of school friends and her local community. It is hard to believe that a bank would be willing to forego a potential lifetime relationship and to risk wider damage to its school program and brand — for the sake of $450.

The bank certainly seems to be living up to its motto of "determined to be different".