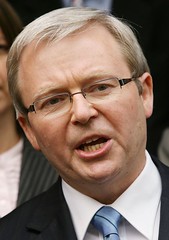 Laurel Papworth follows up on PM Kevin Rudd’s announcement of a 2020 Summit this April — to discuss directions ahead for the next 10 years. See unembeddable video here (c’mon ABC, get with it).

The summit that will bring together 1000 of Australia’s brightest minds will cover:

Laurel is voting for Mark Pesce and for herself (which is fair enough — check out her new profile).

It is great to see some big picture agenda setting. But is there anyone else out there you would like to see in the 1000 strong delegate list? Oh, and do blog this and link to Laurel’s post — we want to make sure that Australian digital media has some representation — even if it is only on Google.

UPDATE: There are a bunch of other folks talking this up: