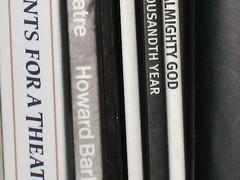 I remember first reading the Cluetrain Manifesto. I remember drinking in the 95 Theses and feeling like my senses were tingling. They were tingling, yes, but it did not seem to be a surprise.

What the collaborators were talking about — participation and activism — was something I had been studying for years. It was just that I was studying Theatre, not Marketing, not Technology. You see, I had just written a thesis on the brilliant English playwright, Howard Barker, and one of his most powerful pieces of critical writing was called "49 Asides for a Tragic Theatre". In this statement, written when Thatcherite Britain was at its zenith, Barker called for challenging and provocative theatre — a theatre of participation.

Ideology is the outcome of pain.
Some people want to know pain. There is no truth on the cheap.
There are more people in pursuit of knowledge than the accountants will admit.
There is always the possibility of an avalanche of truth-seekers.

Many years on from the publishing of the Cluetrain, we are still living in an age where the promise of a revolutionary form of conversation still has power. It has power because, despite its popularity, the ideas contained within the Cluetrain are hard to manifest. Consequently, the Cluetrain remains a marginalised tract.

I was reminded of this recently when I presented at InterestingSouth. I had interspliced text from the Cluetrain with images taken by my four year old daughters. And, to me, the words seemed to float out across the audience who were hearing this, perhaps, for the first time. It made me tremble. It made me focus more precisely on the words. This three minutes seemed much more important. Urgent.

What I like about the Cluetrain is its immediacy. It restores you to yourself — an individual experiencing the tragedy and beauty of everyday living. As Barker would say:

It dares to be beautiful. Who talks of beauty any more? They think it is to do with the costumes.

And it is because of this immediacy. Because of its daring. And because it continues to question the structures of power and influence, the Cluetrain will continue to maintain its relevance. At least for some. Again, from Barker:

People will endure anything for a grain of truth.

One thought on “Why the Cluetrain Still Rings True”