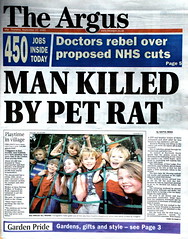 The Argus does it again
Originally uploaded by Erasmus T

It is a perennial debate and one which is not likely to fade any time soon — blogging vs journalism. Darren Rowse picks up the theme this time the print publication (l’horror), Australian Marketing Magazine. The magazine asks Darren and Phil McLean from Fairfax to answer the question, "Will the growing popularity of digital user-generated content pose a threat to the traditional journalist?". I am sure you can guess which side each came down on.

However, I can see no "end" on either side. No end to blogs and blogging and no end of journalism. But there is a question around the economic viability of publishing in its current format — and this is something that the "citizen journalists" have picked up on faster than the publishers — at least in Australia. New initiatives such as Norg and Hunters Best demonstrate that there are gaps in the market that are simply not being served. And, certainly from my perspective, the social media "attempts" by mainstream media players thus far have been poorly conceived and driven by a protectionist spirit. I am still waiting for some of the innovation that Katie refers to.

Not holding my breath for that one.

2 thoughts on “The End of Journalism?”