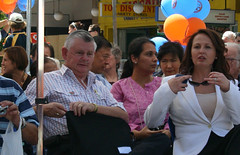 Very few of us know what it means to be an evangelist. Sure, we can believe in some cause, issue or even technology, but the challenges that the modern marketing evangelists have to overcome are relatively lightweight concerns — lack of awareness, market inertia, apathetic employees. The real life evangelist, however, deals in a world of magnified challenges where the outcomes are counted in lives.

In a time where the economic, social and political power of corporations has reached its zenith, Bernie Banton stood out as an individual willing and (barely) able to confront it. Despite suffering from asbestosis, mesothelioma and Asbestos-Related Pleural Disease, Bernie took on the might and legal wiles of James Hardy and the Australian legal system, working to secure the rights to compensation of thousands of workers affected by unsafe working conditions in the James Hardy factories.

At 1am, on Monday, Bernie died at home, in the presence of his family.

In many ways in the last decade, Bernie was the voice of a forgotten Australian consciousness reminding us all of our fundamental humanity and Australian spirit. It was a voice that we sorely needed and one that will be greatly missed.

Next Wednesday, a State Funeral will be held at Acer Arena in Homebush. May you rest in peace, Bernie. And thanks.