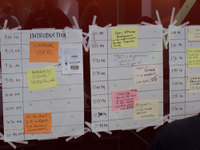 Overall it was fascinating to see how it would evolve. The day started fairly timidly, with very few people volunteering for early sessions. I saw Mick Liubinskas and he said that he was kicking things off in Room 1 and asked whether I was presenting. I said "yes" he said "great, because I had 10 minutes before he was volunteering me anyway."

There seemed to be a large contingent of former UTS students (recent and not so recent) who knew each other and had considered many of the topics emerging during the day (note to self — UTS is fertile ground for new hires). Many of these people had been working now for 10+ years and were involved in entrepreneurial and technology-centric areas which made for plenty of energy and excitement.

What follows are my rushed notes from the presentations. As each session only lasted 15-20 minutes it was rapid fire … and there wasn’t a lot of time available to sit back and not participate.

Ignoring users
We were off to a great start with Mick’s talk on ignoring users. The discussion that kicked off was about what you take on from your user base/community and what you ignore. Mick started by looking at Flickr and their decision to make photos public, even though users requested privacy.

The discussion then shifted towards the concept of innovation … and the need to understand your audience and your position within the market. That is, do you decide to take a leadership position or become a fast/slow follower. Many contributed in the conversations, bringing up a range of technologies and ideas from Flickr and online communities through to Yahoo! Pipes. 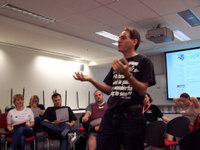 John Rotenstein talked about "timeshifting" and the way that we now consumer media of all kinds. In his own world he admits he is addicted to World of Warcraft. In the last month or so he has lost 3kg … it is called the WoW Diet. A friend of his has lost a massive amount of weight by playing WoW while also using an exercise book.

John also talked about ozTivo and the way that media is now being consumed. Music on his iPod has also been completely erased and replaced with podcasts. Obviously technology is allowing these timeshifts to take place … and it has all the big media companies running scared. What happens when all ads can be filtered, when the audience become the programming directors and the "local content" is drawn from an ever increasing global pool?

Digital/branded storytelling
Then I talked. Sacrum was a big hit — I realise this doesn’t have speaker notes — I just kind of speak off the cuff, but the ideas behind the presentation didn’t change much from here.

Life as an expat
Ray Stephenson then talked about being an expatriate. Almost everyone in the room had lived overseas at some point in their lives, so it made for an interesting conversation. This reflected the way that many technologists are highly mobile, finding themselves in foreign countries. This was fascinating, as the topic veered from technology to people to place and back again. One of the best questions was around the point at which you stop being an expat and start being a native. One of the suggestions was to figure out who do you barrack for in the cricket or some other sport.

We also ended up talking about micropayment systems across different countries … and the way that the culture of a country affects the calibre and style of the workforce. This came down to a conversation about cross-cultural values. Unusual topic for a BarCamp! John suggested we follow up a podcast called the Barefoot College on ITconversations.com. 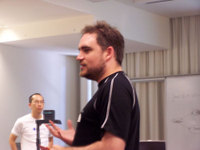 Lean and agile software development
Ben Hogan and Jason Yip from ThoughWorks talking about Lean and Agile Software development. Taking Toyota’s production approach and applying the learnings to software development. Toyota was originally a loom manufacturer … and one of the roles that people had to play in the stop-the-line culture. The focus for Toyota was optimising the flow through your manufacturing processes. Another step was learning to find waste — by putting on the customer glasses on — what is considered value from a customer point of view. This drives the overall customer experience. [pic2]

What is clear is that multitasking COSTS YOU.

MUDA — anything that does not add value — should be eradicated. The plan is to look at end-to-end cycle times and whether each of the tasks are creating or adding value.

There are clear lessons here for marketers as well but I need to process it a little more deeply. More to come on this!

John again … this time talking about how you can hack a Tivo for Australian conditions. He gave a step-by-step guide on what you need to do after you "win" a Tivo on eBay. Interesting, though it does sound a little technical for the average person.

OpenID
Hunter Nield gave a great and energetic presentation on identity and OpenID. OpenID is based around an identifier such as a URL. This means that you can access a website and have it authenticate via OpenID providers such as myopenid.com.

The OpenID standards/specifications are free to use which means you can easily setup your own OpenID provider based on the system. It effectively works in the same way as Open Source or W3C.

The aim of OpenID is to reduce the headache and provide a single sign-on across multiple websites. It is designed to be flexible and some providers also allow profiles so that you can have multiple types of online identities. This means that I could be servantofchaos on my blog and Gavin on another. The choice is yours.

Are these "mum" friendly? Parents ask the questions "What is http:// and why is it different from my email"? And until these barriers can be overcome easily, then there are significant uptake issues.

From a development point of view it is fairly easy to implement. There are existing libraries out there — Ruby, PHP and .Net etc.

OpenID providers are setting up PUSH — which means you update your account at your provider and it then pushes to all your subscriptions. OpenID 2.0 is coming — see openID.net and identity20.com.

There was a great question — what happens if your OpenID provider shuts down? Hmmm … no satisfactory answer.

With traditional development, the focus is on breaking up the waterfall into an iterative framework. If you can break up your work in a different way then you are able to rapidly deploy releases sooner. This provides a return on investment early in the process.

The focus is on organising your work around features. You start with a vertical slice within your system then you need to consider UI, business logic, classes at a domain and enterprise level and data access — all at the same time. By focusing on what you need NOW you are able to minimise complexity and increases speed to market. The question you ask is "what is the smallest possible feature set that you can get away with?". This approach reduces your cycle time and brings money/value back to you earlier.

I am interested in how these methodologies are able to be applied to other areas — what can you do to accelerate product development, how to create strong and focused collaborative teams and how to focus on generating early returns on investment. The focus is on avoiding red-tape — planning frequently rather than following a plan.

"Continuous integration" is an important automation element that allows you make it cheaper in the long run (by finding problems earlier).

Side-by-side peer reviews also seem to accelerate development. So having two developers sitting together means that you get the best result earlier and basically prevent errors before/as the occur. This is called having "pair programming". It is also highly productive because the pairs can become quite powerful/competitive. BUT you can burn out … so you need to only do 3-4 hours per day. Often this is doing two hours in the morning … and then one and a half or two hours later in the afternoon.

Need to do acceptance tests up front and then discuss that with the developers and business up-front. So you wanna startup your own company

Now these guys were funny. And very interesting. Mike Cannon-Brooks and Martin Wells made a great tag-team presenting on the lessons learned from starting up their own companies. They talked through funding models (don’t raise capital or you lose control), different types of investors (family, friends — good, angel1 — small, angel2 — larger, VCs — big money) and the challenges of hiring and culture.

One of the more interesting aspects of their presentation was the way that Mike would comment on-the-fly on Martin’s presentation, often contradicting or disagreeing.

By this time my laptop had run out of juice, so I had to content myself to sending myself Twitter messages during the talk. But I did take mental notes so will try to get back to this at some stage soon — they were both very inspiring and had fun with the presentation.

Unfortunately you can’t attend all sessions, so there were ones that I missed that I did want to see. These included: